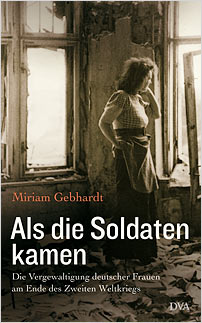 Crimes Unspoken: The Rape of German Women at the End of the Second World War deals with the period between the final days of the Second World War and the end of the occupation of Germany in 1955. The soldiers who liberated Germany from Nazi rule in 1945 also brought new suffering to many women. An estimated one million women and girls – and a considerable number of men – became victims of sexual violence all over the country. Contrary to popular opinion it was not just Russian soldiers who committed rape, but also a large number of American, British and French soldiers.

The historian and journalist Miriam Gebhardt draws on extensive source material, including police, church and hospital documents as well as personal diaries, to chart the widespread sexual violence in the decade after the war. She also demonstrates the dismissive treatment of the victims by doctors, social workers and lawyers in later years.

Gebhardt presents some harrowing truths about the behaviour of allied soldiers in post-war Germany and her account will attract significant interest in Britain and the USA. As a study of sexual violence in wartime it is an invaluable contribution to the ongoing discussion of rape as a weapon in many contemporary conflicts.

Miriam Gebhardt is a historian and journalist and teaches history at the University of Konstanz. She completed a PhD with the title ‘Fear of the Juvenile Tyrant. A History of Upbringing in the 20th Century’ (2009). DVA published her books Rudolf Steiner. A Modern Prophet (2011) and Alice in No-Man’s Land. How the German women’s movement lost the women (2012).