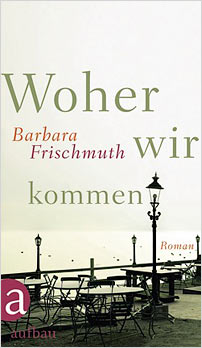 Where we come from is about learning how to live – and in some cases to love – after bereavement and trauma. Through the three distinct narratives related by three women from the same family, the reader shares in the stories of these strong, independent characters as they reflect on the meaning of their lives.

The novel’s stories of lost love belong to Ada, her mother Martha, and her great-aunt Lilofee. Ada is a young Austrian artist who has recently endured her partner’s suicide. Her altered painting style is just one of the innumerable ways in which her life has changed following the loss of her partner. While staying with her mother at their familyowned restaurant in an idyllic Austrian lakeside village, she encounters an old school friend, Jonas. Ada was once very close to Jonas, who has recently returned from the USA with his three small children after the death of his wife. Now, Ada and Jonas fall in love while still mourning their previous partners.

Ada, Martha and Lilofee’s stories belong together and frequently intersect, yet each stands alone in its particular experiences of love and loss. Martha’s story centres upon the unexplained disappearance of her husband, Robin – Ada’s father – during a climbing expedition to the Ararat mountains. Neither Robin’s body nor that of his climbing companion was ever found. Each year Martha returns to Istanbul to visit the other woman who was widowed at the same time, and together they mull over the past and mourn their husbands – until Martha discovers Robin’s secret, which changes everything. Meanwhile, we learn that greataunt Lilofee’s lost love was an escaped prisoner of war from Eastern Europe whom she hid in the mountains until her father denounced him to the Nazis. Lilofee never recovers from these experiences of loss and betrayal.

Frischmuth’s narrative contains many pleasures: its evocative sense of place and engaging characterisation; the humorously realistic depiction of Jonas’ three young children; as well as the striking descriptions of Ada’s artwork which incorporates natural and used objects. The novel’s broad historical and geographical scope, ranging from the outstandingly beautiful village of Altaussee to contemporary Vienna and Istanbul, reflects its thoughtful engagement with different conceptions of ‘where we come from’.

Barbara Frischmuth was born in 1941 and lives in Styria, Austria. She studied Turkish, Hungarian, and Middle Eastern studies. She works as a writer, translator, and columnist and has won numerous prizes for her work.