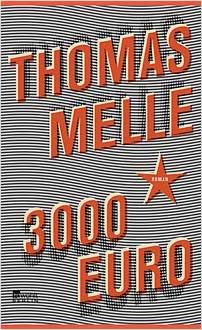 Thomas Melle follows his German Book Prize-nominated debut novel Sickster with this gritty snapshot of life on the fringes of German society.

3000 Euros tells the story of suicidal Anton, a sometime law student and musician who has fallen on hard times and is living in a hostel; and of Denise, a single mother addicted to amphetamines who is struggling to forge a bond with her young daughter.

Their paths cross at the local supermarket, where Denise works on the checkout. A friendship slowly develops and it soon transpires that Anton has a court case coming up, in which he hopes to be declared legally incompetent. He owes the bank 3000 Euros, a debt accrued during his ‘wild phase’.

Denise, meanwhile, has problems of her own. She has recently starred in a porn film, for which she is yet to be paid. As she scans barcodes for hours at a time at the checkout, she is overcome by feelings of shame, disgusted by the lascivious gazes afforded her by the supermarket’s predominantly male clientele. Although she is glad of her new-found friendship with Anton, his presence in her life is an additional complicating factor, not least when she finally receives her fee for the film. Amounting to just over 3000 Euros, the payment means that she theoretically has the funds to free Anton. But is Denise prepared to sacrifice her hard-earned cash for a man she barely even knows? The answer, like the novel itself, is refreshingly free from cliché.

Denise and Anton lose touch, and Denise uses her money to relocate to New York. Just when she has given up hope of ever seeing Anton again, she spies him across the street. Or does she? The incident echoes an event from Denise’s past when her grandmother appeared to her in the street, a week after dying. Is history repeating itself? All that can be said for certain is that Anton, or ‘whoever’ it was, has soon disappeared amongst a group of tourists, never to be seen again.

Though the novel is deeply sad, it is also uplifting, and in Anton, Melle has created a protagonist whose nostalgic preoccupations with a hedonistic youth will strike a chord with many readers.

Thomas Melle was born in 1975 in Bonn, and is one of the most important playwrights of his generation. He was nominated for the translation award at the Leipzig Book Fair in 2006. His prose debut was published in 2007, which earned him the 2008 Bremen literary prize. His award-winning novel Sickster was published in 2011. Thomas Melle lives in Berlin.