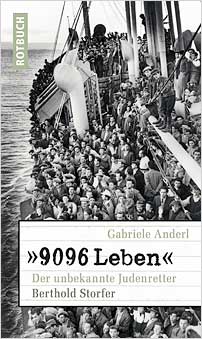 9096 Lives is the powerful story of Berthold Storfer, who saved the lives of thousands of Jewish people after the annexation of Austria in 1938. Born in Czernowitz and himself a Jew, Storfer had a successful business career before the war. His interventions to save Jewish lives inevitably involved a degree of co-operation with the SS, specifically the ‘Centre for Jewish Emigration’ in Vienna, run for a time by the notorious Adolf Eichmann. But his relationships with Nazi officials were of no avail when he was murdered in Auschwitz in November 1944. Despite the success of his rescue operation, Storfer has received scant recognition. His reputation has been tarnished by the understandable reservations of those who suspected him of supping with the devil.

Gabriele Anderl’s original research illuminates the moral dilemmas raised by Storfer’s conduct. Her book is full of arresting material, about the role of the British authorities in Palestine, for example. The result is a gripping examination of a little-known chapter of our recent history, packed with fascinating and unexpected historical details.

Gabriele Anderl worked for the Austrian Historical Commission and has addressed the Nazi era, the politics of Aryanisation, the theft of art during the Nazi era, and aspects of Jewish history in numerous publications. She is a freelance journalist and writer, and lives in Vienna.

Rotbuch Verlag is a small independent publishing house founded in Berlin in 1973. After changing hands and locations in the 1990s and at the start of the new millennium, it returned to its original home city in 2007. From its beginnings Rotbuch was home to both popular and literary fiction, drama and poetry as well as non-fiction titles with a strong emphasis on political issues, particularly with a left-wing slant. With its new hard-boiled crime label Hard Case Crime Rotbuch has been concentrating particularly on foreign as well as German-language crime fiction. Its authors include Birgit Vanderbeke, Heiner Müller, Hannah Arendt, Franz Xaver Kroetz, Mickey Spillane, Jerome Charyn, Peter Weiss, Gunter Gerlach and Nobel Prize winner Dario Fo.