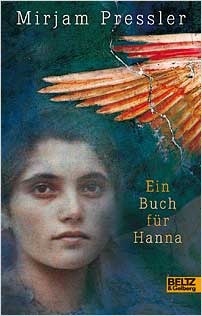 Arrested in the middle of the night, transported for four days in cattle trucks without food or drink, the convoy of Danish Jews walks the final three kilometres to the camp. If they cannot keep pace, they go under. Her muscles aching and her rucksack unbearably heavy, Hanna is unable to control her legs. Then she is confronted with an image of what she will become: the prisoners already there are grey shadows, emaciated, bent over, barely able to move.

A Book for Hanna is a compelling and evocative narrative, based on real events. Written mainly in the third person, it is cleverly interspersed from time to time with a brief chapter in the first person from one of the other main characters.

The aim of fourteen-year-old Hannelore and her friends is to escape Nazi Germany for Palestine, as her elder sister has already done. However, because of British attempts to limit the number of settlers in Palestine, they are given exit papers for Denmark. As a parting gift, Hannelore’s mother packs her copy of Hans Christian Andersen’s fairy tales. These stories weave into the novel throughout, providing Hannelore with reading matter, conversation, inspiration and motivation.

Once in Denmark, Hannelore is given a new, less Germanic identity as Hanna. She settles on a farm where she works every day from dawn till dusk. She learns the rhythm of farming life, and learns to cope with, and then to love, the animals she is working with. Hanna remains close to her German friends, and it is only thanks to this group that she has any awareness of what is going on in the wider world – and that Germany has invaded Denmark.

Over Rosh Hashana in 1943 Hanna goes to stay with Sara Hvid, a friend from a domestic science course that she is taking. She is immediately struck by Sara’s attractive elder brother, Samuel. However, that night, 1st October, Danish Jews are arrested and deported. After eighteen months in the Theresienstadt concentration camp, where many of her friends succumb to disease and death, she is liberated. She and Samuel Hvid, who has also survived the camp, are married and over three years eventually manage to reach Palestine together.

This engaging and engrossing account of friendship, courage and love in the face of immense adversity is aimed at a 14+ readership.

Mirjam Pressler was born in 1940 in Darmstadt, studied art in Frankfurt and currently lives and works as a freelance author and translator in Landshut. She has published numerous children’s and youth books with Beltz & Gelberg, most recently Nathan und seine Kinder (‘Nathan and His Children’, 2009). Her books have been awarded many prizes – in 2001, she received the Carl Zuckmayer Medal for her ‘contribution to the German language’. She was awarded the special prize of the German Youth Literature Award for her literary work as a whole, and for her work as a translator. Pressler has translated and edited Anne Frank’s diary, and she recently took part in an event about the diary at Jewish Book Week in London.

Beltz & Gelberg is the children’s book division of the Beltz Verlagsgruppe, the publishing venture which was established by the printer Julius Beltz in 1868. Beltz & Gelberg was set up in 1971 by Hans- Joachim Gelberg and has offered a rich range of children’s literature ever since. The Gulliver paperback imprint was founded in 1984. In 2002 Beltz took over the book rights of Middelhauve, and two years later founded the paperback series MINIMAX.