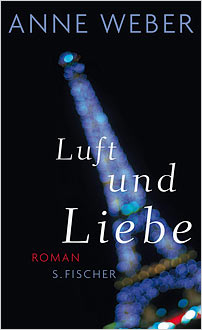 Weber begins by telling her readers that the narrator has just junked her third-person novel about a writer, Léa, living in Paris like herself, and her love affair with Enguerrand, an impoverished aristocrat. Then she thinks no, why pretend? Let’s keep it in the first person. However, from time to time she summons Léa back from the waste-paper basket to help out. The result is a very funny novel of shifting perspectives about a writer working on a novel.

Locations are left uncertain. Enguerrand’s château is ‘in Normandy or Picardy’, or a number of other parts of France. The couple have an affair lasting over a year, she visits him in his château, where she sees herself as a fairytale princess, he visits her in Paris. They decide to have a baby; there’s a nursery already furnished at the château. But the narrator is 42, and she doesn’t conceive. They try fertility treatment, but all attempts fail, and the affair rapidly cools. Intent on having things out with her lover, she goes to his château, walks in unexpectedly, and finds him there with the wife he had all along: she is dumpy, shrewish, but has money – and she’s very pregnant. For the last year the lover has been living one of those complicated double lives that serial philanderers land themselves with. Devastated at first, the narrator consoles herself with the imagined castle in the air of the title: she was in love with a man who never existed, and as a real person she never existed for him. She plans, and carries out, what she knows is a comically childish revenge, spreading the word in the local area that he is a double-dealer. In the final chapter, she suddenly feels much better on a long bicycle ride around Paris. The world and the people in it seem real to her again.

The author has other tricks to play: she says we know all along that the novel (whether third-person or first-person) will end unhappily, but in fact that final bike ride is euphoric. So, she adds, since we know about the unhappy ending, there will be no tension, no surprise – but the sudden appearance of the wife does take the reader by surprise. Written in a sharp and economical style which keeps the reader hooked, A Castle in the Air is deservedly on the short list for the prestigious Leipzig Book Fair Prize.

Anne Weber, born in 1964, lives in Paris and Bretagne. Her books, which she writes in German and in French, are published simultaneously in both countries. She translates both from German into French (including Wilhelm Genazino) and from French into German (including Pierre Michon). Her most recent books are Besuch bei Zerberus (2004), which received the Heimito von Doderer Prize, and Gold im Mund (2005), which won the 3sat Prize at the Klagenfurt literary festival in Austria. Luft und Liebe appeared simultaneously in the author’s French translation (Actes Sud).