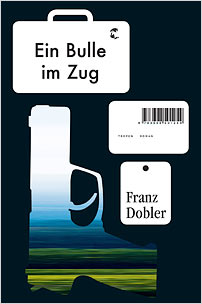 Chief Superintendant Fallner has been suspended from duty for the alleged shooting and killing of a teenage boy. A Cop on the Train follows Fallner on a long exploratory rail journey through Germany as he tries to recover.

The circumstances of Maarouf F.’s death have never been fully clear, least of all in Fallner’s head. He and his colleague Maier were called to an incident at the boy’s home, and by the time they left, Maarouf was dead. Maier seems far less affected by what happened, but is it possible he knows more than he’s letting on? Fallner’s partner Jacqueline is a feisty policewoman who is initially supportive and sympathetic but grows exasperated by his introspective behaviour following the shooting. On the joint advice of his boss and his therapist, Fallner gets a railcard and embarks on an epic train journey to give himself some time to come to terms with what has happened.

Fallner’s journey takes him from Munich to Hamburg and onward to Berlin. He relives the incident over and over again in his mind but cannot make sense of it. Although dead, Maarouf is omnipresent and Fallner imagines that he sees and has conversations with him throughout the train journey. Fallner meets old friends during his trip, visiting his father and reconnecting with an old flame – the girl-nextdoor from his childhood with whom he had his first sexual experiences two decades previously. He meets new faces too, both in the on-board bistro and in his local bar back home. They are invariably people who live on the margins of society, people with whom he feels at ease during this period of personal confusion. Fallner tries to make notes as advised by his therapist, chats to others and to himself with his customary wry humour and reflects on various aspects of life: his love of jazz, his mother’s untimely death and the prevalence of a right-wing mentality among the police. The climax of the book comes when Fallner confronts Maier, who he realises is not only sleeping with Jacqueline, but has been concealing vital information about the shooting. Maier’s confession changes everything.

Dobler captures the experience of life onboard the train perfectly, documenting the rhythm of days and nights shaped by its relentless motion. This is a sensitive literary portrayal of a life in turmoil – a crime novel with a difference and a deserving winner of the German Crime Fiction Prize.

Franz Dobler was born in 1959 in Schongau, and now lives in Augsburg. He has published novels, stories, non-fiction, and poetry, for which he was awarded the Bayerischen Literatur-Förderpreis. A Cop on the Train is his third novel and was awarded the Deutscher Krimipreis 2015 (German Crime Fiction Prize 2015). www.franzdobler.de

Klett-Cotta is one of Germany’s oldest publishing houses. Cotta, the essential publisher of German classical literature, which was founded in 1659, stands for major literature and philosophy in the tradition of Johann Friedrich von Cotta, publisher of Goethe, Schiller, and others. The other half of its tradition traces back to the publishing house that was developed by Ernst Klett between 1936 and 1976.