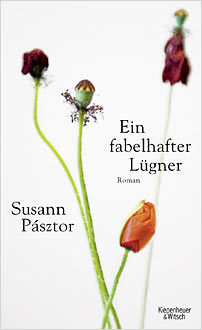 Lily, the 16-year-old narrator of this hilarious, intelligent tale, tells the story of a family reunion to celebrate 100 years since the birth of her grandfather, Joschi, a teller of tall tales, often married and the father of many children. The book begins with Joschi’s attempt to put an end to his life in a cheap railway hotel, thwarted by the entrance of the proprietor – Joschi had only paid for two hours. Later, three women bend over his hospital bed, two of them pregnant by him, the third with his son.

So the offspring meet up: Lily’s mother, an ex-punk, her half-sister Hannah, and Gabor, now in his sixties. Their knowledge of Joschi is hazy: that he was Jewish, that he survived Buchenwald and that his wife and two of his children died in Auschwitz. They take a trip to Buchenwald in his memory and the ill-sorted gang of eccentrics is observed by Lily, who is making up her vision of the world as she goes along – and inspired by her mother’s frequent use of the word ‘imagine’ to begin her sentences. Much of the delight of the book lies in the observation of curious details.

Conversations and reminiscences about the family abound, along with the nonsensical stories that Joschi used to tell, and in the course of the visit all their certainties are gradually eroded – was Joschi even Jewish, or did he invent his Jewishness after the war to get the compensation? And was he ever in Buchenwald?

Towards the end, Lily mentions in passing that she has a half-brother. Everything, it is suggested, is contingent. She remembers a scene from her childhood involving some stew and alphabet noodles – the noodles were a bribe to make her eat the stew, but she was sick. Her father took a long time clearing it up ‘because the story in the noodles was so fascinating’. After that, he had always read her stories in the alphabet spaghetti. Lily concludes that you can never really know anything or anyone, but you can still tell stories.

Susann Pásztor tells an excellent story, vivid, digressive, funny, bitter-sweet in its portrayal of family comedy against a tragic historical backdrop. Lily’s voice, on the threshold of adulthood but relishing her immaturity, is a joy, and the family are terrific fun to be with. A refreshing new voice, and a wistful, conciliatory take on the horrors of the last century.

Susann Pásztor was born in 1957. After studying art and education, she initially illustrated others’ children’s books before she began writing her own. Since 1991 she has worked as a freelance journalist, author, copywriter and translator. Ein fabelhafter Lügner is her first novel