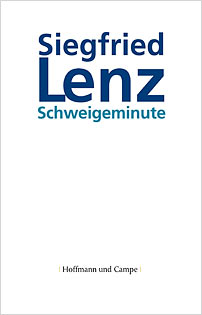 The setting of this elegant novella, by an author now aged eighty-two, is a small town called Hirtshafen on the Baltic coast, at a period when ‘Benny Goodman and Ray Charles [were] still in vogue’. A minute’s silence is being observed in the hall of the Lessing Grammar School in memory of the school’s popular young English teacher Stella Petersen. The novella returns to the ceremony now and then, skilfullly alternating with eighteen-year-old Christian’s account of his summer love affair with his teacher.

The town’s industries are maritime, with fisheries and tourist excursions to Bird Island not far away. Christian’s father owns an excursion boat, and a flat-bottomed vessel for dredging up large stones to extend the breakwaters, and Christian helps with the work. Stella lives in nearby Scharmünde with her old father, from whom her love of the English language comes. He was radio officer on a Luftwaffe fighter plane brought down in Kent during the war. The two young people make love in the town’s Seaview Hotel when she is staying the night there for the big Hirtshafen beach party, and thereafter meet discreetly. Then Stella goes for a holiday with friends on a yacht, sailing around the Danish islands. As the yacht returns to Hirtshafen at the end of the trip, a storm breaks. Stella and one other person are flung overboard and crushed against the harbour wall. A few days later, despite attempts by Christian and other students to fire her desire to live, she dies in hospital of her injuries.

This is a poignant novella about young love, and no mere teenage infatuation on Christian’s part, for he is older than he looks and she younger. It couldn’t have lasted, of course, but the account of Christian thinking of all that Stella meant to him is truly affecting, and the picture of Hirtshafen, its seascape and its shore, is an integral part of the mood. In a recent interview Lenz has said that the death of his wife of fifty-six years affected him so much that he developed writer’s block a few pages into this book. Fortunately he recovered and has made a good shot at complying with Auden’s famous request, ‘Tell me the truth about love.’

Siegfried Lenz was born in the East Prussian town of Lyck in 1926. Starting with his novel Es waren Habichte in der Luft (‘There were hawks in the air’), his works have been published by Hoffmann und Campe Verlag. Lenz has been awarded numerous prizes, including the Goethe Prize of the City of Frankfurt and the Friedenspreis des Deutschen Buchhandels (Peace Award of the German Book Trade).