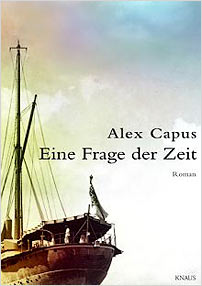 As the narrator remarks at the beginning of this wonderfully elegant and altogether absorbing novel, set in German East Africa at the time of the First World War, people seldom question the validity and significance of the things they set out to do. Certainly when Anton Rüter and his two colleagues, Wendt and Tellmann, agree to transport a new steamer, the Götzen, from Pappenburg in northern Germany to Lake Tanganyika, they have little idea of the consequences of their decision, or indeed what the unexpected outbreak of that terrible war will do to their respective lives, turning them from boat builders to members of the German navy under Captain-Lieutenant Gustav von Zimmer’s command.

Equally unaware of what the future holds in store for him is von Zimmer’s adversary on the British side, Commander Geoffrey Spicer Simson, a man nearing the end of an inglorious military career who has been sent to Lake Tanganyika with two small motor boats, incongruously named Mimi and Toutou, which he transports across the continent by rail with the express purpose of scuppering the German fleet. In the event, the whole outcome is a fiasco. Two German steamers, admittedly, are successfully sunk, but only because they are even more dilapidated and badly equipped than Mimi and Toutou. And when the opportunity comes to attack the much bigger and mightier Götzen, Spicer Simpson fluffs his chance, as does von Zimmer when it comes to his turn to attack Mimi and Toutou. But the crowning moment is reached when Rüter and von Zimmer, formerly antagonistic, scuttle the Götzen at her moorings and make off into the bush.

War, colonialism, absurdity – Alex Capus deals with big themes but in a gentle and unpretentious way and with a rich and warm humour. The central events of the book are based on fact, but the characters are richly drawn from the author’s imagination, and one of the many delights of this book is their continuing ability to surprise. Even Spicer Simson, an inveterate windbag and show-off, defies expectations and turns his back on fame in a gesture of humanity. Here is a little-known byway of history brilliantly brought to life by an author of real accomplishment.

Alex Capus born in France in 1961, lives in Switzerland. His books have been translated into several languages and his work has won numerous prizes. He first worked as a journalist and published his first book, a collection of stories, in 1994. His speciality is the sensitive blending of carefully researched fact with fictitious lives. Capus also translates novels from the English.

Albrecht Knaus Verlag, now an imprint of Random House, was founded 1978 by Albrecht Knaus and the Bertelsmann group. Its list is liberal and broad, and aims to be both entertaining and informative, linked to the present while remaining aware of the past. Authors include Irène Némirovsky and Peter Ackroyd.