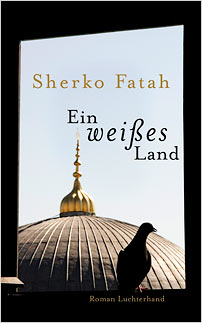 Following his successful 2008 novel, Das dunkle Schiff, which told the story of a young Iraqi during the first Gulf War, Fatah turns his considerable powers to an epic story exploring the relationship between Iraq and Germany during the Nazi period, and the history of the Jewish community in Iraq.

A White Land is packed with character and incident, opening in 1955 when Anwar, an Iraqi veteran of the Second World War, spots a German doctor in a local hospital. Can it be the same Dr Stein who treated Anwar during the war? The plot shifts back in time to Anwar’s youth in Baghdad, when he betrayed the trust and affection of his Jewish friends and became involved with the Black Shirts, and progresses chronologically through his posting to Berlin as a bodyguard to the Grand Mufti of Jerusalem and into his years as an SS soldier on the Eastern Front, where he participates in the systematic massacre of Russian partisans and civilians. The final chapter returns to 1955 and solves the mystery of what has brought Dr Stein to Iraq.

A unique perspective on the Second World War, and a shocking picture of a young man who apparently commits atrocities without motivation.

Sherko Fatah was born in 1964 as the son of an Iraqi Kurd and a German mother. He grew up in East Germany and, in 1975, moved with his family to West Berlin, via Vienna. He studied philosophy and the history of art. He has received numerous awards and grants for his narrative work including the Hilde Domin Prize, the Alfred Döblin Grant, the honorary Award of the German Critics’ Prize, and the Literarisches Colloquium Berlin Grant. Ein weißes Land is his fourth novel.