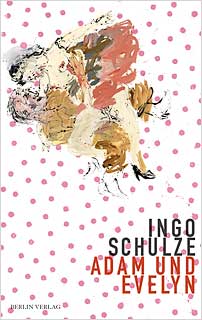 Two years ago Ingo Schulze produced his splendid, and in every sense weighty, ‘Wende novel’, Neues Leben. There followed a prize-winning collection of short stories. Now he returns to the novel form again, this time relatively compact and dialogue-driven, distinctive and winning in its flavour and graced, if subtly, with some prelapsarian connotations.

Adam is a tailor and clothes designer par excellence, not averse to bedding the women to whom his creations give their transitory moment of beauty and content with his lot in his East German home town. Not so Evelyn (Eve), with whom he lives, and who dreams of a different sort of life in a different sort of place where she could study, for instance, the history of art. Her frustration overflows when she comes upon Adam and the frolicsome Lilli (Lilith?) in flagrante delicto. She leaves for Hungary on holiday without him, joining her friend Mona (the snake in Adam’s paradise?) and Mona’s West German cousin who is frank in the expression of his affections for her. Adam sets off in hot but amusingly amicable pursuit, with pet tortoise Elfriede as his travelling companion – and soon also with a sparky young lady who is fiercely determined to leave the East, willing to swim the Danube, cross borders in the trunks of cars, whatever it takes.

It is 1989, however, and the changes to come are in the air. Schulze skilfully recreates the temporary communities that sprang up along the Hungarian border as word filtered through that access to Austria would soon be open, and the holidaying group in idyllic Balaton are in a place on the brink of irrevocable change. Is this a chance to seize? And if so with whom? Will Adam return to his comfortable life in the GDR and join the voices of protest there? He is tempted. Or will his love for Evelyn lead him to follow her in her West German dream? Will that dream, in any case, prove anything more than a shallow shell offering all that money can buy but nothing else?

Schulze handles his themes and characters with all his charm, wisdom and experience, capturing the atmosphere of those certain months in that especially memorable year. There is a lightness of touch here that doesn’t dilute the impact of hope, disillusion and fraught relations that are the minefield to be crossed in the pursuit of any imagined Garden of Eden.

Ingo Schulze was born in Dresden in 1962, studied classical philosophy in Jena and then worked in Altenburg as a playwright and newspaper editor. He has lived in Berlin since 1993. He won many prizes for his first book, 33 Moments of Happiness, including the Aspekte Literature Prize and in the same year the New Yorker named him one of their ‘Six Best European Young Novelists’ while the Observer listed him as ‘one of the twenty-one authors to look out for in the twenty-first century’. For Simple Storys,he received the Berlin Literature Prize (Johannes Bobrowski medal). Ingo Schulze’s major novel Neue Lebenwas published in 2005, earning him the Premio Grinzane Cavour that year. His short story collection Handy (2007) won the Prize of the Leipzig Book Fair.

His books are translated into twenty-five languages.
English-language editions have been published by Macmillan (UK) and Knopf (USA). For further details contact the editor.

Berlin Verlag was founded in 1995 as an independent publishing house. It produces literary fiction and quality non-fiction for a wide audience by a select range of international authors. It is also known for its work in fostering promising young German writers such as the now acclaimed Ingo Schulze, Elke Schmitter, Irina Liebmann, Jan Wagner and Gila Lustiger as well as for publishing the plays of Elfriede Jelinek, Nobel prizewinner in 2004. Since 2003, Berlin Verlag has belonged to the Bloomsbury Publishing group. After the successful launch of the children’s books list, Bloomsbury Kinder- & Jugendbücher, in 2003, a new imprint, Bloomsbury Berlin marked the second phase of its development, introduced by the appearance of the British firm’s most famous bestsellers such as The Kite Runnerby Khaled Hosseini and Schott’s Original Miscellany.