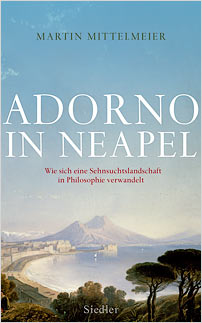 Adorno in Naples is a highly original book which brings to life a short phase in European intellectual history when the romantic landscape of the Bay of Naples in southern Italy became a magnet for writers, poets and philosophers. Martin Mittelmeier’s thoughtful blend of travel-writing and philosophy coincides with a revival of interest in the Frankfurt School and its leading light, Theodor Adorno.

Southern Italy was traditionally the end point of the Grand Tour undertaken by the European aristocracy and literati during the eighteenth and early nineteenth centuries. At the beginning of the twentieth century figures such as Bertolt Brecht, Maxim Gorky and Theodor Adorno flocked to Capri and Sorrento. This meeting of minds in the South, which has a British parallel in the Bloomsbury circle’s enthusiasm for the Sorrentine peninsula, has never been explored or written about before. Like all tourists, these intellectuals were looking for undiscovered, special places. But, of course, as soon as such places become talked about they begin to lose their appeal. Mittelmeier maintains that the topic of tourism is the starting point for Adorno’s subsequent development of his Critical Theory.

The young Adorno is a musician who is studying composition in Vienna. At first he follows the tourist trail unwillingly, accompanied by aspiring political journalist Siegfried Kracauer. But soon he is enchanted by the landscape, both for its southern gentleness and its wild, untamable qualities. Mittelmeier recounts how Adorno’s daily diary entries at this time lay the foundations for his mature philosophical thinking. His thoughts are inspired both by the natural world and by his discussions with fellow intellectuals and are full of fascinating observations and unique formulations. Concepts such as ‘porosity’, which here refers to a geological characteristic of the ubiquitous pumice rock, come to inform the social analysis in Adorno’s later work, where he describes how the bourgeoisie aims to fill all creative spaces in the porous fabric of society in order to cement their power. Mittelmeier argues convincingly that this phase in Adorno’s life, unencumbered by academic constraints and regulations, reanimates his later philosophy, which has often been considered difficult and hermetic.

Adorno in Naples furthers our understanding of the European intelligentsia during the early twentieth century, and is an invitation to rediscover Adorno.

Martin Mittelmeier was born in 1971 and is seen as one of the most prominent publishing editors for contemporary literature in Germany. After eleven years at Luchterhand Verlag, he has been head of fiction at Eichborn Verlag in Cologne since 2012. The PhD comparatist has published several works on philology and philosophy.