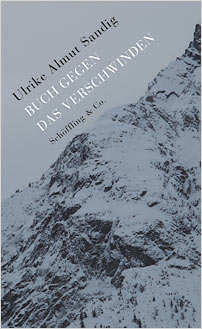 Ulrike Almut Sandig is a master storyteller who writes in beautiful poetic prose. The six substantial short stories that make up this flawlessly crafted collection all deal with different forms of disappearance and disappearing worlds.

‘Far Beneath Us The Molten Rock’ is an engrossing story of a man losing his wife. During her illness the man regales his wife with wonderfully detailed descriptions of what is happening in the depths of the earth underneath the house he has built for them. When she dies unexpectedly the man is thrown into panic. He becomes convinced that he too is ill, but is told that although he is old he is extremely fit. Though depressed and unresponsive, he eventually warms to the cleaner who visits him, the young man who brings him meals-on-wheels, and the young couple expecting a baby who own the book shop he frequents in town. He comes privately to regard the couple as a new family, which sustains him in his final years.

In ‘Birthday Story’ a man is looking forward to having the biggest birthday party of his life. He plans to invite all his friends and show them how perfect his life is with his wife and daughter. But while he is writing the invitations his wife tells him that she is leaving him and taking their daughter with her. He is so caught up in his fantasy that he hardly listens to her and barely reacts, yet the spells of dizziness that subsequently overwhelm him point to a state of inner crisis behind his calm outward appearance. In fact, the dizziness is the manifestation of a debilitating illness – the persistent denial of which has led to the end of the couple’s marriage.

The stories in Against Disappearing explore various modes of disappearance and the consequences for those involved, illuminating perennial questions about the human relationship to the world. Sandig presents the reader with a sequence of intriguing characters whose responses to their curious predicaments generate an array of insights into human behaviour and relationships. Her self-conscious writing style adds to the charm of the stories, encouraging the reader to share in the creative process. Sandig’s perfectly poised narrative continues at just the right pace for readers to appreciate the exquisite detail of her writing. This innovative collection is an absolute delight from start to finish.

Ulrike Almut Sandig was born in 1979 and lives in Berlin. In 2001, she collaborated with the songwriter Marlen Pelny to found the literary projects augenpost (eyemail) and ohrenpost (earmail), in which they pasted poems onto construction fences, spread them using flyers and free postcards, and held their first performances. In 2005, Sandig completed her Master’s in Religious Studies and Modern Indology. From 2007 to 2009 she was the co-editor of the literary magazine EDIT and in 2010 she received her diploma from the German Creative Writing Program Leipzig.
Sandig has been granted literary residencies in Sydney and in Helsinki. Her works have been awarded several literary prizes. Several of her texts have been translated into English, French, Polish, Turkish, Serbian, Bulgarian, Rumanian, Spanish, Arabic, Ukrainian, and Hindi.