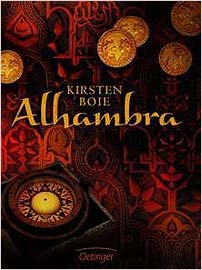 Boston, a slightly awkward teenager, is on a school trip to Granada and not getting on too well with his ultra-cool classsmates. Then suddenly he is transported back in time to the year 1492 and the shadow of the Spanish Inquisition – from which moment on, thrill follows breath-taking thrill.

First our protagonist is mistaken for a young prince due to be married to a Spanish princess and taken in state to the royal court at Alhambra, where he witnesses Christopher Columbus’s request to sail westward across the sea to India being scornfully refused. Soon, and not surprisingly, his false identity is suspected. He flees the palace in fear of his life, leaves Granada itself, and rejoins two boys he had met on his first arrival – Tariq a Moor and Solomon a Jew, both of whom are involved in an anti-royal plot. Together they travel up into the mountains to the residence of the last Moorish king, whom Tariq hopes will start a revolution. Meanwhile, back at the palace, King Ferdinand and Queen Isabella have decided that Boston must have been a spy. Then they come across his mobile phone and think he is in league with the Devil. Before long the whole country seems to be on the hunt for him so that he can be burnt at the stake.

How is he to escape? The solution lies in a broken tile which he touched when he saw it on display in a shop in Granada. Tariq and Solomon try to recover it for him but fail and soon are facing the Inquisition themselves. Boston is anxious to save his two friends but even more to make sure that Columbus discovers America, otherwise, in the twenty-first-century, he will of course no longer exist. By now his classmates back in 2007 are in a right panic, the shopkeeper who owned the tile has drunk himself into a stupor, and as for Boston, whether or not dressed up as a monk, there are many further excitements in store before all is set to rights.

In this imaginative tale Boie paints a vivid picture of the politics of the time and the complex relationships between the three main religions. An exhilarating, stylish read.

Kirsten Boie was born in Hamburg in 1950 and is one of Germany’s best-known living authors of books for children and young people. She worked as a teacher before beginning her career as a writer. Since then she has produced over sixty books, many of which have been translated into several languages. In addition to her novels, she also writes short scripts for children’s television as well as lectures and essays. She has received both national and international prizes for her work.

Verlag Friedrich Oetinger was founded in 1946. In 1949 the company published its first book by Astrid Lindgren, Pippi Longstocking, and all her subsequent books were also published by Oetinger. In the following decades the publishing house paved the way for Scandinavian children’s literature in Germany. The current programme – including Astrid Lindgren’s complete works – features more than 600 picture books, children’s and young adults’ books, both fiction and non-fiction. Leading authors published by Oetinger include Paul Maar, Kirsten Boie, Christine Nöstlinger and Sven Nordqvist.