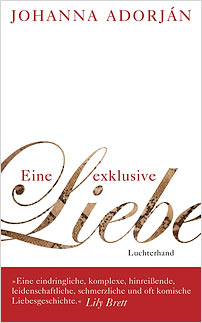 In this vivid and highly personal novel Johanna Adorján focuses on the lives and deaths of her paternal grandparents, a Hungarian Jewish couple who met at a musical evening in Budapest and committed suicide together in Denmark after many wartime tribulations on discovering that the husband, István (shortened to Pista), was suffering from terminal cancer. The early part of their relationship is dominated by the Nazi invasion of Hungary in March 1944, during which two-thirds of Hungary’s Jewish population were killed, many of them gunned down in mass shootings on the banks of the Danube. Pista, a surgeon, was deported to Muthausen concentration camp, and remained silent afterwards on what he may have been forced to do there. Then came their postwar lives in Communist-dominated Hungary. The author considers the role her grandparents played in shaping her own identity, particularly in relation to questions of Jewishness and her own mixed German, Hungarian and Danish heritage. She remarks on how meticulously her grandparents planned their own deaths, and observes how many other victims of the camps also committed suicide.

A powerful, reflective and thought-provoking work, with echoes of similar recent treatments of the theme but distinct in its own right.

Johanna Adorján, born in 1971 in Stockholm and now living in Berlin, began by studying theatre and opera directing. She has worked as an editor and freelance author for various newspapers and magazines and since 2001 has been editor of the culture section of the Frankfurter Allgemeine Sonntagszeitung in Berlin. She has written plays for the theatre, and a screenplay that was filmed by Ed Herzog.

Luchterhand Literaturverlag was founded by Hermann Luchterhand in 1924 and has been publishing literary titles since 1954, an early and triumphant success being Günter Grass’s novel Die Blechtrommel (The Tin Drum, 1959). Its list includes literary fiction and poetry as well as definitive editions of selected writers’ complete works. In 1997 the firm was voted Publishing House of the Year by the German trade journal Buchmarkt. It is now part of the Random House Group. Authors include Christa Wolf, Ernst Jandl, Pablo Neruda, António Lobo Antunes, Will Self, Frank McCourt, Hanns-Josef Ortheil, Terézia Mora and Saša Staniši´c.