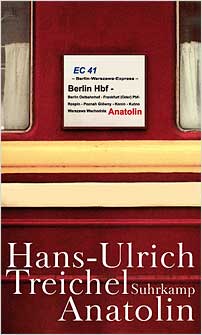 Treichel’s first novel, published in English in 2000 under the title of Lost, was the story of a missing child, based on his family’s own experience. This short book picks up the theme again. The narrator recalls how his parents lost their eldest child Günter in their flight from the Russians at the end of the war, their vain search to find him, and what that loss meant also to the children born later.

At the beginning Treichel as narrator has already been to his father’s birthplace in the Ukraine. Now he is in a train from Berlin to his mother’s birthplace in Poland, the small town of the title, where, at the very end of the book, he becomes more or less reconciled to his parents’ sad story of loss and inhibition. He has also been in touch with the man who, as a child, was thought by his parents to be possibly their son but whose DNA tests prove negative.

Hans-Ulrich Treichel was born in Versmold, Westphalia in 1952. He now lives in Berlin and Leipzig where he is Professor of German Literature at the university.