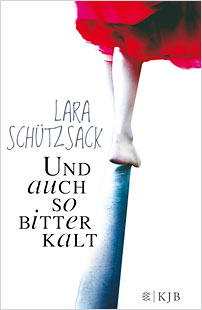 Schützsack’s strong debut captures the urgency and crisis of adolescent life in an authentic and touching narrative.

Malina admires her older sister: Lucinda is beautiful, brave, unconventional, extremely charismatic and imaginative. But Lucinda also has a morbid side to her, and on her darker days she will just stay at home and cry.

She never eats and her parents worry, especially her mother Eva, who sees Lucinda’s eccentric behaviour as a constant search for attention. Her younger sister is the only one who understands her, but when it comes to boys, Malina hasn’t a clue. None of them last long – until Jarvis moves to their street. Jarvis can speak English, listens to Pulp and falls in love with Lucinda. She enjoys being his muse and playing the power game. Then the unthinkable happens: he hangs himself.

After Jarvis’s death, things get worse. Lucinda seems to be fading away. The tension between her and Eva is unbearable and creates a strained atmosphere between her parents. The day her parents finally decide to transfer Lucinda to a clinic, Malina rushes up to her room to warn her, but Lucinda has left.

Malina’s perceptive character reveals the hopes, fears and ambitions of teenagers – as well as those of adults.

Lara Schützsack was born in 1981 in Hamburg, and completed her studies in script writing at the German Film and Television Academy, Berlin. In 2013, her first film Draußen ist Sommer (“Outside It Is Summer”) was shown in German cinemas. Lara Schützsack lives and works as a writer and musical advisor in Berlin.

S. Fischer Verlag was founded by Samuel Fischer in Berlin in 1886. He was the first to publish many now famous authors such as Franz Kafka, Arthur Schnitzler, Hugo von Hoffmannsthal and Thomas Mann. Both S. Fischer Verlag and Fischer Taschenbuch Verlag focus on literature, psychology and history.