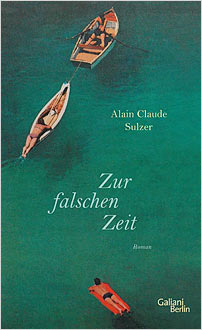 A young man’s attempt to solve the mystery surrounding his father’s suicide; the difficulties besetting homosexuals in the 1950s; a tragic love story which ends in a suicide pact – At the Wrong Time is also an utterly convincing and beautifully observed novel about the unspoken and the unspeakable.

The seventeen-year-old narrator, ‘reserved and sensible, or maybe just boring’, lives with his mother and stepfather. About his father he knows only that he committed suicide aged twenty-four shortly after the birth of his son. A handful of holiday snapshots and a studio photograph are the only other clues he possesses to his father’s short existence; his mother prefers not to talk about him.

Gradually it dawns on the narrator that he might try to find out more. The name and address on the back of the studio photograph take him to Paris and his long-lost godfather, André Gros. Little by little, the narrator begins to piece together the past and the secret of his father’s homosexuality. We learn that his father, Emil, met André at school and fell in love with him, that it was through him that Emil began to discover and explore his sexuality. We learn of Emil’s three bouts in a lunatic asylum, sent by his parents in attempts to ‘cure’ his ‘latently perverse infantile personality’. When André betrays him with a string of lovers and eventually leaves for Paris, Emil convinces himself he is in love with Veronika, a secretary at the asylum. They marry and Emil becomes a teacher, but he is soon seduced by Sebastian Enz, a young man training to be a teacher at the school he works at. When Sebastian decides to change mentor and has to move school, the two of them have little choice but to meet in the house that he shares with his mother. And when Sebastian’s mother discovers the affair and blackmails Emil, he and Sebastian see no way out but to kill themselves. Finally, even when confronted with the truth, the narrator’s mother tries to suppress it.

Sulzer’s introverted characters, quietly accepting and utterly incapable of communicating with one another, intensify the tragedy in a way that would be impossible if they screamed at each other or wanted to talk things through all the time. A small pool of spilt red nail polish is the closest Veronika gets to a scream. Reminiscent of Colm Toíbin and Ian McEwan, At the Wrong Time is restrained, tantalising and wholly original.

Alain Claude Sulzer was born in Basel in 1953. He became an internationally acclaimed author in 2008 when his novel, A Perfect Waiter (2004), was translated into English (Blooomsbury) and eight other languages. It was praised in the UK, US, and international press, and the French edition won the 2008 Prix Médicis du Roman Etranger. Sulzer has also been awarded the Hermann Hesse Prize (2009) and is longlisted for the Wilhelm Raabe prize for his new novel, Zur Falschen Zeit.

Galiani Berlin is the new imprint under the roof of Kiepenheuer & Witsch, established in 2009 by Wolfgang Hörner and Esther Kormann – the creative minds behind the programme. They publish a mixture of literature, classics and narrative non-fiction in hardcover format only. The imprint is named after Ferdinando Galiani: a true genius who was interested in everything around him, innovative, unpredictable and never boring. This reflects the path that Wolfgang Hörner and Esther Kormann are following with their new imprint. Authors include Helen FitzGerald, Karen
Duve, Jan Costin Wagner.