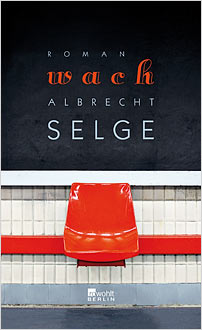 Awake is a triumph of a debut novel – skilfully crafted, poetic and acutely observed, with delightful comic touches – that stands out amongst the ‘Berlin novels’ of recent years. August Kreutzer has a day-job at an organisation that builds and manages huge shopping malls. He is unfulfilled in his work and prone to philosophising. He finds it increasingly difficult to fall asleep and starts wandering the streets at night. When his tiredness becomes apparent at work, his boss orders him to take some time off. August uses these extra hours to go on more and more extensive walks.

His sensibility is such that he absorbs all kinds of details and facets of life in the city. August becomes a projection screen for the city, and loses any sense of responsibility towards his sleepless self and his private life (there is an absent girlfriend, Susanne, whose phone calls he never answers when he does spend some hours in his flat). The world August experiences is very different from the sanitised ‘Artificial Paradises’ of the mall: it is multi-faceted and strange. And he actively looks out for places that are permeated by multiple layers of time and meaning – through a rotting newspaper clipping, or an old shop sign. Piece by piece these indicators of the past become a psycho-geographical mapping of Berlin, where the traces of time and change are especially plentiful.

Yet the novel’s scope transcends that of a mere ‘Berlin novel’. At a street corner August imagines the people who have walked here in the past. This parallel world, which takes centre-stage in August’s mind, makes the present world seem unreal, and real people walking by seem to be ‘no more than future shadows’.

Walking through a sad, semi-abandoned remnant of a village beyond the city limits, August sees a perfect village appearing in the distance, brimming with life, full of shops, nice houses, and pubs. As he approaches, he realises that his perception has played a trick on him and that he has fallen prey to the very thing he created many times as an executive of ‘Artificial Paradises’ – an artificial world, an almost picture-perfect copy of a village that turns out to be a huge, open-air shopping mall.

In Awake, Selge touches on all the big questions – history, time, perception, the meaning of life – without being heavyhanded, and reflects on what makes a story ‘meaningful’.

Born in 1975 in Heidelberg, Albrecht Selge grew up in West Berlin and studied German and philosophy in Berlin and Vienna. He was a finalist in Berlin’s Open Mike literature competition in 2004, and took part in the literature workshop in Klagenfurt and the Berlin Literary Colloquium. Among other awards, he has received a grant from the Berlin Senate to pursue his literary work. Now working as a freelance author, he lives in Berlin with his wife and two children. Awake is his first novel.