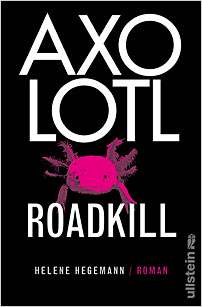 ‘You write like a roadkill,’ the narrator’s brother tells her, and there’s plenty of spilled guts in this striking debut novel. Imagine Bret Easton Ellis meeting Kathy Acker and bitching about Charlotte Roche – at the legendary techno club Berghain.

Mifti is 16, rich, and shares a flat in Berlin-Mitte with her older half-brother and half-sister. Her mother was a drug addict, her absent father is a wealthy artist. Mifti divides her time between her bed, older friends’ flats, parties and clubs, and describes days of drug-induced thrills, sex and ennui; traumatic events from her earlier childhood; and the memorable characters that inhabit her life. Mifti is a fascinating narrator, highly intelligent and perfectly aware of her own psychological problems. Part of the book’s fascination is the almost voyeuristic feeling of watching a disturbed character slip further and further off the rails. She compares herself to the axolotl of the title – a salamander with a permanent smile on its face that never reaches maturity. This is certainly no ‘coming-of-age dramolette’, as Mifti tells us. The narrative written in diary form skips from one incident to another, and the dialogue deftly captures the endless loops of drugged-up conversations that seem fascinating at the time. As the novel proceeds the writing becomes more jagged and disjointed, with Mifti losing her grip on time and place. Yet Hegemann never loses sight of her structure, with a shocking double denouement after Mifti finally runs away from her family.

Although the author is deliberately provocative and sometimes tongue-in-cheek, she has genuine talent and plenty of depth. There was a major scandal after it was revealed that Hegemann’s ‘sampling’ approach meant cutting and pasting modified phrases, sentences and lyrics from other writers’ works like a literary DJ, with a couple of sections more like a techno mix than an original version. Having provoked wide-ranging discussions on plagiarism, authenticity and intertextuality, the result is well worth reading now that the rights issues have been clarified.

A witty and inventive novel, Axolotl Roadkill is a highly original reworking of the ‘rich immoral teenagers’ genre. Given the tangible interest in Berlin’s party scene from around the world, it will strike a nerve with a younger audience – and with those who want to read the most talked-about book of the season.

Helene Hegemann was born in 1992 and lives in Berlin. This, her first novel, has been nominated for the Lit.COLOGNE prize, which will be awarded for the very first time in March 2010, as well as the 2010 Leipzig Book Fair prize. Her first play, Ariel15, was premiered in 2007 and her first film, Torpedo, was heralded as ‘the discovery of the year’ at the Hof Film-Festival 2008. It was released throughout Germany in the summer of 2009 and has also garnered the prestigious Max Ophüls Prize.

Ullstein was founded in Berlin in 1903 by the famous family-owned Ullstein newspaper publishers. The company quickly rose to become Germany's leading book publisher. In 1934 Ullstein was expropriated by the Nazis. In 1952 the house reopened in Frankfurt and seven years later it was sold to the publishing group Axel Springer. In 2003 Ullstein's book division was bought by the Swedish media group Bonnier, who brought Ullstein back to Berlin in 2004. The Ullstein publishing group includes the imprints Ullstein, List, Claassen, Marion von Schröder, Tanja Graf Verlag, Econ, Propyläen and Allegria. The broad spectrum of titles includes bestselling authors such as Jo Nesbo, John le Carré, James Ellroy and Helene Hegemann in fiction; Shlomo Sand, Richard Dawkins, Natascha Kampusch and Timothy Ferris in non-fiction.