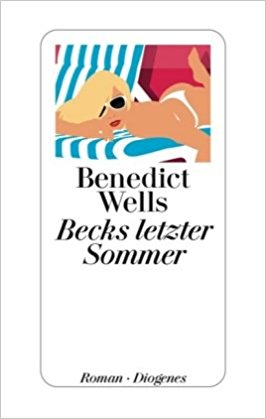 The period of this outstanding debut novel is a fateful summer in the late 1990s, excellently described. Its principal setting is Munich, its anti-hero is the thirty-seven-year-old teacher and failed musician Robert Beck, frustrated with his job and irritated by the steadily increasing eccentricity of his closest friend Charlie Aguobe, a coarsely-spoken German African hypochondriac who regales him with stories of cancer, Aids, tumours and the looming inevitability of death.

Distraction is offered now and then by day-dreams of the nubile Anna Lind, object of fantasy for students and teachers alike. But the real catalysts for change in Beck’s life present themselves in the characters of Lara, a young and ambitious waitress, and Rauli, the seventeen-year-old who has recently moved to Munich from Lithuania and quickly becomes an outsider within the school. Discovering the boy playing his own Fender Strat guitar in the back room after music class one day, Beck realises that he has encountered a true musical genius.

But Rauli himself is far from an open book. From the revolver he is rumoured to carry to the yellow slips of paper he consistently and secretly writes on, he remains a perplexing mystery to Herr Beck, as he calls his mentor. Beck meanwhile spends much of the rest of his time trying to win the beguiling Lara, despite the fact that he is a decade older than she and unable to keep up with her youthful exuberance. Meanwhile Charlie is compelled to check himself into a clinic to deal with his substance abuse problems and other issues, and Beck, guilty at having failed to take alarm earlier, agrees when the time comes to drive him to see his mother in Turkey, a road trip which Rauli joins and which provides many of the surreal and wonderful moments that make this book so engaging.

As the novel closes there are many disappointments marring the dreams of these characters, including Charlie’s being killed in a plane crash at a time when he had finally made peace with his fear of death and disease. But the book itself is the reverse of depressing. Like the musical genius of Rauli himself, it is a gem waiting to be discovered.

Benedict Wells was born in Munich in 1984 and spent his early childhood in Switzerland. At the age of six he began his journey through three Bavarian boarding schools. Following his graduation from high school in 2003, he moved to Berlin where he decided not to go to university. Instead, he set down to write his first novel. He made a living doing odd jobs, most recently working on the editorial board of a talk show. This debut offering is already garnering warm praise and sales.