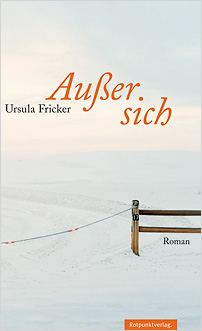 Ursula Fricker’s novel dares to imagine a situation beyond most of our worst nightmares. Her sensitive portrayal of what it might mean to have a loved one irrevocably taken away – and yet still be there – negotiates the highly topical ethical dilemma of assisted dying, as well as drawing on universal themes of love and commitment.

Married architects Sebastian and Katja exemplify a modern, professional couple living in fashionable Berlin. Both aged around forty, they have prioritised their careers, leaving the question of whether or not to have children to simmer in the background. In general, Sebastian would like to start a family, while Katja has reservations. They also disagree over what to do about their cat, Rufus, who is suffering from a kidney tumour. The vet has advised that he be put to sleep and while Sebastian agrees with this course of action, Katja does not want to give up hope that Rufus’s condition might improve. This predicament pre-empts one of the novel’s central themes: how long should a life be artificially prolonged, when that life is arguably not worth living?

On their way to spend a weekend with friends, something happens to change Sebastian’s and Katja’s lives forever. Stuck in gridlocked traffic caused by an accident, Sebastian suffers a brain haemorrhage and falls into unconsciousness. Over the following weeks Sebastian comes out of his coma and regains some of his basic bodily functions, but he has lost his ability to communicate and respond to other people. He gazes into the distance and shows no signs of recognising his wife or anybody else. After struggling to look after Sebastian – now unable to speak, or to feed or clean himself independently – at their home, he is finally admitted to a care home, while Katja gradually returns to her career and brings him home for weekends and holidays.

Without his medication, Sebastian would certainly have died. Increasingly, he refuses to accept food and becomes thinner and more frail. Could this be an expression of a will that wishes to end the suffering? Doctors propose performing an operation on his stomach so that food can be pumped into it directly. It is at this point that Katja decides to take fate into her own hands, bringing the novel to its unexpected and moving conclusion.

Fricker’s absorbing depiction of the no man’s land between life and death is ideal book club material.

Ursula Fricker, was born in Schaffhausen in 1965 and now lives in Berlin as a freelance writer and journalist. She has won several awards for her novels. For the work on her latest novel, Fricker received a grant from Schaffhausen as well as from the UBS cultural foundation.

Rotpunktverlag was founded in 1977 and has developed an excellent reputation as publisher of fiction and political non-fiction. In fiction, it focuses in particular on works by Swiss authors, including many debuts, and its nonfiction list is devoted to contemporary political and social issues. Rotpunkt is a member of SWIPS, the association of independent Swiss publishers.