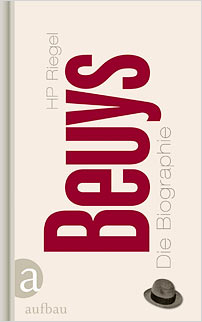 This is the first objective biography of Joseph Beuys (1921-1986) – one of the twentieth century’s most influential and controversial artists. Hans-Peter Riegel’s fascinating biography is an important contribution to the debate about who this enigmatic personality really was.

Riegel’s well-researched book exposes the many discrepancies between Beuys’ accounts of his early life and what actually happened. Beuys gave numerous interviews in which he reshaped events; despite insisting it was reality, the myth that he was rescued by Tartar tribesmen who wrapped him in fat and felt has long been debunked. The challenge of differentiating truth from fiction becomes especially fraught with regard to the extent of Beuys’ involvement and identification with National Socialism. While Beuys described his school and his hometown of Kleve as relatively free from Nazi influence, Riegel shows that this was far from the case. Riegel also challenges Beuys’ claim to have rescued a number of books from the pile of library books which were burned outside his school.

After World War II Beuys studied sculpture, experienced an episode of profound depression, began his academic career and became part of the Fluxus movement. Riegel’s descriptions of these events make great reading. He charts the evolution of Beuys’ radical and provocative performance practice and offers an impressive analysis of the ideas obscured behind the chaotic performances.

By the late 1960s Beuys had achieved commercial and critical success. Riegel revisits Beuys’ major exhibitions in New York, Ireland and the UK. He also considers his dismissal from the Düsseldorf Academy of Art and takes a closer look at his dubious political activities, including his involvement with an obscure ecological party, the AUD. Beuys seems to have seriously believed that this could provide his chance to change the world and Riegel exposes his sympathy for the party’s nationalist tendencies.

English-language readers will be captivated by this rigorous portrayal of one of the twentieth century’s most brilliantly eccentric – and ethically suspect – artists.

Hans-Peter Riegel was born in 1959 in Düsseldorf and studied Visual Communication, Photography and Philosophy. He met Jörg Immendorff in 1974 and was his assistant from 1979 to 1984 and later became his project partner. Riegel used to be active in advertising and is now a Creative Consultant, doing photography and working with concept and film art.

Aufbau Verlag is an independent publishing house with a broad program of fiction and non-fiction titles. Each year, about 200 new titles are published by its four imprints Aufbau, Rütten & Loening, Blumenbar and Aufbau Taschenbuch. Aufbau Verlag was founded in 1945 with the motivation to create a new cultural orientation for the people in post-World War II Germany. It soon became the leading cultural and literary publishing house in East Germany. Today Aufbau publishes a strong literary fiction programme with German and international voices as well as an outspoken non-fiction list.