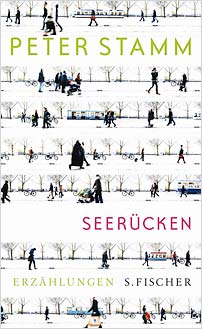 This year the New York Times described Stamm as ‘one of Europe’s most exciting writers.’ Beyond the Lake, his fourth volume of short stories, which was shortlisted for the prestigious Leipzig Book Fair Prize 2011, demonstrates why.

Against the background of various alienating and utilitarian settings, Stamm describes the inner lives of individuals struggling to come to terms with the circumstances of their existence – loneliness, fear, loss, failure – yet occasionally enjoying brief moments of enlightenment or momentary connection with other individuals. In this way Stamm’s short stories capture fleeting thoughts and events in lives which are in a constant state of flux and uncertainty. But, like photographs, they offer neither judgment nor simple solution.

‘Sweet Dreams’ focuses on the hopes, doubts and fears of Lara, who’s recently moved into her first flat together with her boyfriend. Stamm is particularly good at portraying the tensions in the relationship between the sexes, for example with a childless couple on holiday in ‘The Way of Things’. Sometimes there are indications of mental instability in Stamm’s characters, as in the collection’s opening story, ‘Summer Guests’. ‘In the Forest’ tells of the life of a girl who, having been subjected to the drunken and violent behaviour of her parents, spends three years living in a nearby forest while still attending school. There are intimations that living in the natural environment of the forest enables the girl to experience a contentment which is denied to her first by her unhappy home life with her parents, and then later when she lives on an anonymous new housing estate with a faithless husband and two children. The girl’s mind is haunted by the image of a hunter whose potential to end her life she perceives as a source of comfort.

Described as a ‘master of minimalism’, and of ‘linguistic asceticism’, Stamm writes in a concise, unpretentious and understated manner which conveys a sense of quiet reflection, humour, humanity and honesty. With subtle gestures and brief exchanges of dialogue, he is able to articulate elusive insights into a variety of universally recognisable issues and dilemmas concerning life and relationships. His portrayal of contemporary life expresses a sense of unease and alienation in an uncertain world in which it’s increasingly difficult to feel at home. Furthermore, the twists and turns of the plotlines are unpredictable and thought-provoking, raising questions in the reader’s mind.

Peter Stamm was born in 1963 and now lives near Zurich. He had his international breakthrough with his debut novel Agnes in 1989. Since then his books have been translated into thirty languages. For his novels and collections of stories he has received various prizes, including the Ehrengabe des Kantons Zürich (1998 and 2001), the Rauris Literary Prize (1999), the Rheingau Literary Prize (2001), the Schiller Prize, the Carl-Heinrich-Ernst- Kunstpreis (2002) and the Alemannischer Literaturpreis (2011).