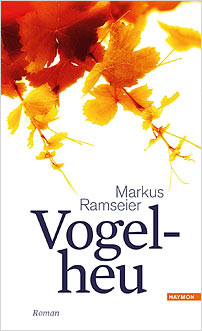 Nineteen-year-old Flo loves her grandfather more than anyone else in her life. To others her grandfather is renowned as a wine grower, inventor, left-wing environmentalist, gifted storyteller and charismatic ladies’ man, but he and Flo share a special bond which matters more than any of these things. Markus Ramseier’s novel opens with a terrifying fire that starts in the hut close to the grandfather’s vineyard, just hours after the end of his seventieth birthday party. Flo’s grandfather is severely injured and has to be flown to the nearest hospital by helicopter. Most of his home is destroyed, including his precious collection of snails, carefully preserved in formaldehyde. After the fire the vineyards – known as ‘Paradise’ – are all that he has left. Tensions rise in the family when Flo’s father plans to expand the hotel he bought from Flo’s grandfather and transform the entire area into a spa resort even though this would mean the destruction of the vineyards and the snails’ habitat.

The police investigate the fire while Flo, already alienated from her ambitious parents, wanders around the hotel and grounds. The investigators suspect her of knowing more about the origins of the fire than she lets on. She loses her virginity to a visiting medical student and is nearly seduced by a biologist from Florida who is also interested in the Paradise snails. Throughout the text she questions her own possible guilt. Most of all she longs for simpler times and a return to her idyllic childhood with her grandfather. The poetic descriptions of the landscape contrast with those highlighting the confusion and conflict that torment Flo.

Markus Ramseier raises some important questions in the course of this admirably poised and subtle novel, asking about the sort of places that really matter to people: a palatial spa hotel or a grandparent’s humble home? Questions about environmental protection and the dilemma of how to balance technological progress with traditional values are unobtrusively posed alongside his thoughtful portrayal of the oddities and fractures of everyday life. When Flo’s grandfather is diagnosed with terminal cancer she rescues him on their beloved red tractor, taking him back to his vineyard and his hut. Flo and her grandfather’s former lovers care for him until he dies, leaving his vineyard to Flo. The novel’s outstanding achievement is its enchanting depiction of the tender relationship between grandfather and granddaughter.

Markus Ramseier was born in 1955 in Liestal, Switzerland, and lives as an author, place name researcher and freelance editor in Pratteln. He previously worked as a teacher, journalist and editor for a publishing house. He has been awarded numerous prizes for his literary work, such as the Bookprize of the Canton Bern in 1995 and the Bettina-von- Arnim-Prize in 2001.

Haymon Verlag was established in 1982 by the historian, journalist and author Michael Forcher as a non-fiction publishing company. The Haymon Verlag is named after a giant named Haymon who, according to an old legend, founded the Stift Wilten monastery near Innsbruck in the eighth century. It was one of the first cultural centres in the region that later became known as the Tyrol. Since 1988, it has primarily published German-language and international literature. Haymon Verlag has been a subsidiary company of the Studienverlag since September 2004.