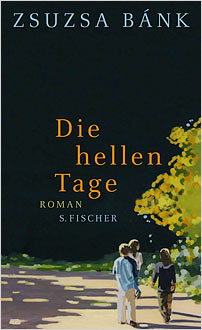 Eagerly awaited since Bánk’s stunning debut, The Swimmer (2005), this is a beautiful and heart-warming novel that touches on many universal issues, with characters to die for. Seri, Aja and Karl grow up in a small town in the 1960s. The best of friends, they experience the bright days of childhood at Aja’s Hungarian mother’s ramshackle wooden house by the edge of the fields. Endless summer evenings, birthday parties, swimming in the lake, climbing trees, ice-skating, cartwheels, cakes, poppies and long grass.

Yet all is not quite as idyllic as it seems. All the children’s fathers are absent: Seri’s died shortly after her birth, Karl’s withdrew into his shell after his younger son disappeared, and Aja’s father Zigi is a trapeze artist who only visits occasionally. In between the descriptions of childhood, Bánk focuses on the mothers and their stories, showing the hardships each of them has suffered. We watch Aja’s mother Eví develop and form friendships with the other mothers, go out to work, learn to read, start a business and help the others to overcome their own problems.

In the second half of the novel, the three young adults move to Rome, ostensibly for their studies but of course to escape the narrow confines of small-town life and to cut their mothers’ apron strings. There, their troika turns into a love triangle, and each of them learns or reveals a secret about their past that puts their bonds to the test. How have those bright days of childhood shaped their lives and personalities? And if the assumptions they grew up with are not true, then are they still the individuals they thought they were?

Beautifully narrated, the early chapters are sketchy and dreamlike, while the later sections reveal more and more detail. Bánk subtly tackles immigration issues, yet they take a back seat to the touching family stories. Political realities give the book its factual framework and are not ignored – the novel could not be set in any other period, for example, with changing women’s roles playing a key part – but they are not its focus.

About three children and their mothers, about childhood and how it affects us as adults, about women surviving and bringing up children against the odds, this magnificent novel is a deeply moving story of individual lives that will appeal to a broad audience.

Zsuzsa Bánk was born in 1965 and worked as a bookseller before studying journalism, political science and literature in Mainz and Washington. She currently lives as a writer in Frankfurt am Main with her husband and two children. Her first novel, Der Schwimmer (The Swimmer), won her the aspekte Literature Prize, the German Book Prize for debut novels, the Mara Cassens Prize, the Adelbert von Chamisso Prize, and was translated into English (Harcourt, 2005). She was awarded the Bettina von Arnim Prize for her short story ‘Unter Hunden’ (‘Under Dogs’).