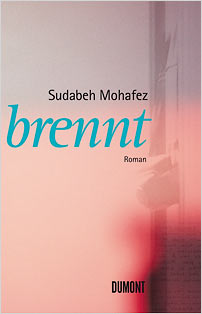 Mané is a successful music producer and the firstperson narrator of this original, vibrant and thoroughly contemporary novel. Rescued at the very last minute from her burning flat in Berlin, Mané seeks refuge with her cousin, yet despite being surrounded by loving friends, she is unable to come to terms with the event. She is haunted by the hissing and crackling that continues in her head, and traumatized by the loss of her hearing and her livelihood.

The principal cause of Mané’s distress are two voices that she hears in her head, who torture her with an incessant and malicious commentary, convincing her that the fire was revenge for events that took place in the past. Slowly it becomes apparent that the fire brings to the surface a deeper trauma that has so far been repressed by Mané, a tragic accident that led to the death of her partner and their unborn baby in Iceland, where they had met and lived. Mané feels guilty for their death, not only because she was driving the car, but also because she believes that she never really deserved the love or happiness she knew then. She has tried to suppress these feelings since, but now they erupt with force.

Although Mané does not respond to professional help, she benefits from two new relationships: with a little girl Coraline, and with the fireman Sebastian, who was part of the rescue team. Mané helps to look after the child, whose mother is unfit to care for her. In what develops into a tender love story, Sebastian offers Mané the time and space she needs to open up to him. Crucial to a sense of closure is a trip back to Iceland and on her return, she begins the therapeutic act of writing down her story.

The narrative thrums with immediacy and informality, told to the beat of the music that has so defined Mané’s life. It often resembles a stream of consciousness, artfully portraying Mané’s confused mental state and the ongoing battle with the voices in her head. The song lyrics that open each chapter locate the book firmly in the urbancool lifestyle of 21st-century Berlin, and the story hints at the distress often lying just beneath the surface of this frenzied party culture. This subject matter, coupled with real originality and readability, makes burning a very strong candidate for translation.

Sudabeh Mohafez, born in 1963 in Tehran, is the daughter of a German mother and an Iranian father. She grew up speaking German, Persian and French. She has lived in Germany since 1979 and received her school-leaving certificate in 1982. After studying Music, English Literature and Pedagogy she ran a women’s shelter for many years. Mohafez moved to Lisbon in 2005, but returned to Germany in 2007 where she now lives as a freelance writer in Stuttgart. In 2006, she received the Adelbert von Chamisso Advancement Prize. Aside from numerous fellowships she taught Poetics in 2007 in Wiesbaden and was awarded the MDR Prize for Literature in 2008.