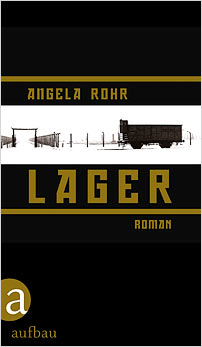 Camp is an autobiographical novel by Austrian writer, journalist and doctor Angela Rohr (1890-1985). It recounts the author’s experiences as both a prisoner and a doctor in the Soviet Gulag. Rohr moved with her husband to Moscow in the 1920s, where, as an ethnic German, she was arrested when Nazi Germany went to war with the Soviet Union. She subsequently spent years in prison and labour camps and was subjected to ‘eternal exile’ in Siberia. Sixteen years after her arrest and four years after Stalin’s death, she was finally ‘rehabilitated’ and spent the rest of her life in Moscow. The novel spans the time between Rohr’s arrival in the Siberian Gulag and her final days in exile.

Camp is primarily a narration of events which the author either witnessed or overheard during her work there. The stories and events in the book are masterfully presented and give a grim picture of life in the Gulag. The book reads as a gripping tale of survival in a hostile environment under conditions which would destroy the lives of millions of people. While there are separate short descriptions of different experiences and events, the overarching account of the life of the narrator ties together the terrible tapestry of suffering in the camps. This novel provides a human-scale overview of the destructive nature of the Gulag system based on the author’s own extensive experience of different camps. The narrator’s starting point is her own hunger and illness, but she immediately shifts her focus to the plight of her patients; and throughout the novel she achieves a balance between concern for the camp prisoners and her own suffering.

The language of the novel is clear and precise, marked by a particular Austrian diction and by the influence of the Russian language – the latter recognisable as the linguistic background to the text. The novel’s nuanced diction and skilful narrative technique uncompromisingly plunge the reader into the dark world of starvation and physical suffering.

The narrator describes her work as a struggle for the lives of her patients; she has to push herself to the limits of physical and psychological exhaustion to save her patients and confront the ruthlessness of the regime. She recounts how prisoners, too, fight for their lives by all means, including faking illnesses and even resorting to self-mutilation in order to avoid forced labour. As a doctor, she does not judge the prisoners for these actions because she believes that all means are fair when human life is at stake. The struggle for life is a metaphor she repeatedly uses to describe the gruesome reality of the camps. But at the end of her time in Siberia, she recalls, she had no more energy to struggle for her patients. She was exhausted by the hypocrisy, injustice, and cruelty of the regime.

The labour camps allowed the regime to victimise the prisoners in the cruellest ways, without necessarily killing them, and Rohr had a unique insight into the state of prisoners’ bodies. For the doctor-narrator, the horrors of physical suffering were not a matter of disengaged observation but part of her daily work. She not only treats her patients, but performs the autopsies after their deaths. The doctor in the camp registered all the deaths and had to assess the physical condition of the prisoners and their readiness for work. The narrator recalls that she had to pass judgment in the camp, and because she was reluctant to do it, her duties made her both part of the system and its irreconcilable opponent. She describes all the imaginable and unimaginable deaths in the camps, and observes that even the most horrifying and improbable things eventually happened. Rohr’s narrative perspective in Camp is comparable to that of Richard Flanagan’s protagonist in his Man Booker Prize-winning The Narrow Road to the Deep North (2014), in which Dorigo Evans, a prisoner and doctor in the Burmese labour camps, is faced with the same sort of agonising decisions about the relative value of human lives.

The novel preserves the memory of the victims of the Gulag and explains the functioning of the repressive regime of the Soviet Union. Today the text reads as an autopsy of and testimony to the Soviet regime’s violence, taking careful account of human loss and physical damage. Camp is a memorial act by Angela Rohr, who fought not only for the lives of her patients but also for their remembrance. At one point in the text, she considers herself as a ‘memory for all time’. The Soviet labour camps were a global atrocity, and Camp makes a significant contribution to global cultural memory. It is to be hoped that this novel will be widely translated to reach an international readership.

By Pavlo Shopin
Pavlo Shopin is writing a doctorate on the work of the Nobel Laureate Herta Müller at the University of Cambridge.

Angela Rohr (1890-1985) was born in Moravian Znojmo. She belonged to the Dada scene, was friends with Rilke and Freud, wrote expressionist prose texts and married several times. In 1925, she travelled with her husband to Moscow where she was arrested in 1941 and sentenced to five years in the Gulag, before being sent into exile. Rohr was absolved of all charges in 1957 and returned to Moscow. 2010 saw the publication of her sensational collection of stories ‘The Bird’. ‘Camp’ is the first complete and faithful edition of her extraordinary Gulag memoir.