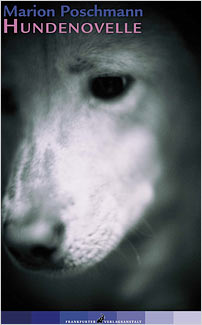 The first-person narrator of this novel leads a life characterised by a self-imposed solitude. She is a natural loner who needs and defends her space until a large, black dog follows her home from one of her walks on a hot summer’s day.

The dog is beautiful and elegant, an imposing, graceful and energetic creature, and the narrator finds herself torn between respect for the animal and resentment at his intrusion. As if powerless to resist, yet often scornfully, she lets herself be drawn into the dog owner’s world, buying food, taking him to the dog parlour, giving him baths and taking him for walks. Yet she is not prepared to give him a name or make him a permanent companion. At times, she recognizes similarities between them, for example their self-sufficiency, and the way he does not seem to care much for being touched. Yet she also finds him repulsive, especially his smell and his fleas. A whole lot of feelings and confusion have taken over her life. She longs to tell somebody about what has happened, but is left without friends (her own choice) or family (her mother has died). She’d like to be rid of the dog and at the same time wants him there. Mysteriously, she feels he knows something (about her, about what is going to happen?), which she does not yet understand.

One day (almost out of the blue) she takes him to a lake, ties him to a tree and leaves him there with a bone. She returns home, goes to bed and has a deep, dreamless sleep. What follows are almost delusion-like states. She seeks the company of dogs, buys herself dog-shaped luxury soap, dog stickers, postcards featuring dogs. She secretly feeds dogs in the park. Days follow where she does not notice dogs at all. She wants to return to her old life. One morning, she finds the dog in front of her door, emaciated and weak. She welcomes him home, and he dies with a contented face. The final scenes find her under a motorway bridge, perceiving animal shadows and movements. Delusions. And, finally, Orion’s dogs in the night sky.

Shades of A.L. Kennedy’s So I am Glad? An original, compelling mixture.

Marion Poschmann was born in Essen in 1969 and now lives in Berlin. She read German, Philosophy and Slavonic Studies at university and is a prize-winning author of poetry and prose. Previous works include Grund zu schafen (‘Reason to Sheep’) and Schwarzweissroman (‘Black and White Novel’) – both with FVA. Her novel Schwarzweissroman was longlisted for the 2005 German Book Prize.

The Frankfurter Verlagsanstalt is an independent publishing house headed by Joachim Unseld. With a focus on new German fiction by young authors and some translated contemporary foreign fiction, it has secured an excellent reputation in the ten or so years since it was launched. Authors include Zoë Jenny, Bodo Kirchhoff, Gerd Loschütz, Christoph Peters, Thomas von Steinaecker, and Michael Wallner.