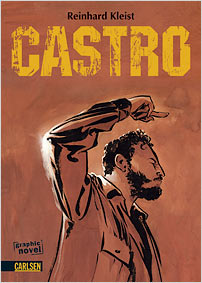 Fidel Castro and Cuba continue to exercise a unique fascination in the minds of Western readers, and Kleist’s gripping graphic-novel treatment is a thoroughly worthy addition to the burgeoning literature on the man and the country.

Castro is the story of Karl Martens, a journalist who travels to Cuba just before the revolution to interview the rebel leader – and never leaves. Arriving in Cuba in 1958, Martens is smuggled into the rebel camp, interviews Castro, and meets Lara and Juan. He is told the story so far, from failed coup to gradual ascendency via guerrilla warfare, and learns about Castro’s childhood and early years. There are also flashbacks to Juan’s university days as a young writer impressed by Castro’s speeches. Martens is wholly converted to their cause, but as a clueless gringo he isn’t allowed to go with them into battle and returns to Havana.

After the revolution, Martens meets up with Lara and Juan again. Amidst all the excitement about building a fairer society, he and Lara become lovers; but Juan, as a gay intellectual, soon finds himself on the wrong side of the new regime. Historical events – such as the Bay of Pigs and the Cuban missile crisis – are seen from the point of view of both Martens and Castro. Martens remains throughout a diehard supporter of the Castro government; however, as the US embargo kicks in, Lara finds the shortages, hardships and restrictions unbearable. In 1980, when Castro suddenly and briefly allowed anyone who wanted to leave to do just that, she threatens to join the exodus to Florida. The next time Martens comes home, Lara’s things are gone. In a frantic and moving episode, he catches up with her at the harbour, but she, together with Juan, have made up their minds to flee. Martens watches as the boats set sail.

As an old man, Martens is still in Havana. During the eighties and nineties his journalism work dried up and he was forced to make his living off the black market. He’s married and has a child. However, he wonders what would have happened if he had acted differently in 1980. Castro, also now an old man, is dictating a book in his hospital room, philosophising about Barack Obama, contemporary affairs, revolution.

Kleist’s illustrative style is full of contrast and dynamism with a strong feel for body language, action and atmosphere; his storytelling is touching, evocative and convincing.

Reinhard Kleist was born in 1970 and studied Graphic Arts and Design. Since 1996 he has been living in Berlin, where he shares his studio with other comic book artists. His comic books have won several awards, including the most prestigious one for German comic publications, the Max und Moritz award for his book Cash, about Johnny Cash.

Carlsen Verlag was founded in 1953 as a subsidiary of the Danish company Carlsen, based in Copenhagen. The ‘Pixi’ booklets, launched in 1954, proved to be a hugely successful venture. Since then Carlsen has published more than 1,300 titles with a total print-run of more than 250 million copies. The German translation of Tintin (1967) established comic books as an acceptable genre in the German market and, with an increasing number of publications including the highly successful Japanese Manga series, the comics list is attracting considerable interest from other European publishers. Distinguished Carlsen authors include Kai Meyer, Andreas Steinhöfel and Zoran Drvenkar, all available in English translation.