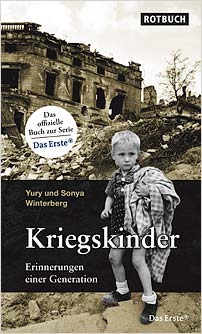 The companion book to the acclaimed ARD television documentary series, this is the story of World War Two told from the perspective of those who were then children, starting on the eve of war and ending in the immediate post-war period, when families are trying to put their shattered lives back together. It uses eyewitness accounts (as recalled by adults today) of fifty-two contributors, thirty-five of these Germans, the others Polish, British, French or Russian. The text is illustrated with archive photos, family photos and children’s drawings and the book works brilliantly on its own. The narrative style is unadorned, letting the facts speak for themselves. And speak they do in an extraordinary, fascinating, shocking and gripping style.

A schoolboy who fails to keep his Nazi scrapbook up to date is beaten up by his teacher in front of the class. German parents critical of the Nazis dare not let their own children know what they think, lest the children repeat the stories outside the home and thus betray them. There is a fascinating insight into how Nazis used terror to make German citizens their own gaolers, but not always were they successful. The reader learns of a working class district in Stuttgart where no one hung a swastika flag from their window. Cäcilia Verheyden was born a cripple in Duisburg, to such an extent that she was later judged fit only for a ‘special needs home’. But the family has just heard the notorious sermon against Nazi euthanasia delivered by catholic Graf von Galen, the Bishop of Münster, so her mother tells the official she would rather drown her daughter in the Rhine and jump in after her, ‘and you can tell that to your fucking Führer!’. Remarkably, she goes unpunished. Children evacuated from Hamburg to the Baltic coast in the late summer of 1943 receive mail from home that bears scorch marks from the July firestorm. Hitler Youth groups line up to salute Hitler’s Christmas tree as it passes in a train in December 1944, and Moscow’s Red Square is camouflaged with foliage to deceive the Luftwaffe while an image of the Kremlin is painted on another.

The last letters sent to their children by two resistance fighters on the eve of their execution cannot be read without tears. But then that is true of much of this essential book which provides an illuminating and frank perspective on that war, with reflections applicable to many other conflicts as well.

Sonya Winterberg was born in 1970 and has an MA in European Media Studies. Her work focuses on the themes of war and trauma. After periods in Belgium and the USA she is now based in Berlin and in her country of birth, Finland.

Yury Winterberg was born in 1965. He read Psychology at the University of Dresden. He is the co-founder of a film and television production company and has written prize-winning documentaries.

Sonya Winterberg was born in 1970 and has an MA in European Media Studies. Her work focuses on the themes of war and trauma. After periods in Belgium and the USA she is now based in Berlin and in her country of birth, Finland.

Yury Winterberg was born in 1965. He read Psychology at the University of Dresden. He is the co-founder of a film and television production company and has written prize-winning documentaries.

Rotbuch Verlag is a small independent publishing house founded in Berlin in 1973. After changing hands and locations in the 1990s and at the start of the new millennium, it returned to its home city in 2007. From its beginnings the house published both popular and literary fiction, drama and poetry as well as non-fiction titles with a strong emphasis on the discussion of political issues, often with a leftwing slant. With its new hard-boiled crime label Hard Case Crime Rotbuch has been fostering its foreign crime fiction interests, while also publishing an ambitious selection of German language crime novels. Its authors include Birgit Vanderbeke, Heiner Müller, Hannah Arendt, Franz Xaver Kroetz, Mickey Spillane, Jerome Charyn, Peter Weiss, Gunter Gerlach and Nobel Prize winner Dario Fo.