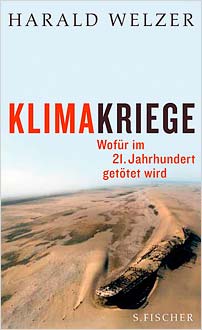 This highly topical book looks at the climate change debate from an angle different to that of the usual scientific studies. It begins with the tale of the German colonial mail/ slave ship Eduard Bohlen, which ran aground off the coast of Namibia in 1909. The place where it was wrecked now forms part of the desert and is some way from the shoreline. The author uses this image both as an illustration of the dramatic effects of climate change and as a metaphor for our entire social model of democracy, liberty, art and culture, which he fears could soon be stranded just like the ship. He argues that a socio-economic form based on growth and the exploitation of natural resources cannot work as a global principle, since the world’s population is growing as the basis for securing survival decreases. There are currently 1.1 billion people without clean drinking water. This number is likely to rise with global warming, and meanwhile certain parts of northern Europe are set to profit from warmer temperatures. Climate change intensifies global inequalities and the potential for global conflict. Mass migration and wars for resources are likely, Welzer believes, to be the biggest social challenge of the modern age. Thus he examines in detail the connection between wars and violence and climate change, for instance in the Sudan. He further argues that mass murder and genocide, e.g the Holocaust, are not exceptional accidents in history, as they are often portrayed, but are possibilities of democratic society. In addition many examples show that the process of social transition also gives way to increased violence.

Welzer criticises the current approaches to dealing with climate change: there is a tendency to believe that adopting a more ecologically sound lifestyle will reduce or halt global warming, which he considers grossly unrealistic and thus irresponsible. He is pessimistic about humankind’s chances of dealing with the climate problem constructively and suggests that our society, which grew out of the age of the Enlightenment, has little future.

Gloomy? Perhaps. But an exceptional contribution to one of the crucial issues of our time.

Harald Welzer, born in 1958, is director of the Centre for Interdisciplinary Memory Research at the Institute for Cultural Studies in Essen. He also works as Research Professor for Social Psychology at the University of Witten/Herdecke.

Translated editions of his work are published by:
Gallimard (France), Ambo Anthos (The Netherlands), Daidalos (Sweden).

All recommendations from Spring 2007