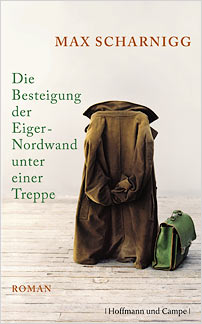 With Kafka-like moments of surreality and pathos, Scharnigg’s disarming debut novel is an absurd epic, assured, ironic and full of charm. Slight but tightly structured, and spanning just a few days, its appeal lies in its bathetic descriptions, beautiful clear images, and lyrical moments between characters.

Nikol has moved out of the flat he shares with his girlfriend, M., and taken up residence under the stairs of his apartment building. Together the couple had become more and more isolated from the outside world, and M. has not left the house in more than a year. Journalist Nikol has become used to no one seeming to notice him anymore, so it’s quite comfortable in the stairwell. And he’s busy composing in his mind an article about the heroic ascent of the north face of the Eiger in 1937. He has retreated to this burrow because of the sight, in front of his apartment door, of a pair of shoes. Who could have been visiting? Nikol is now too far outside his comfort zone and would rather not go into the apartment to find out.

At first, Nikol claims he is perfectly happy just sitting unnoticed under the stairs, making cynical observations about the identical lifestyles of the yuppie couples who ascend and descend above his head, running through his memories of his relationship with M. and trying to figure out why and when she became ill and reclusive, and composing his epic. The Eiger narrative is interwoven with Nikol’s story to wry effect, the gripping tale of four historical mountaineers a sardonic commentary on the narrator’s absurd struggle to climb the stairs back up to his flat.

Then Schmuskatz, an eccentric old man living opposite, invites him over to his flat for paprika chicken and a few drinks. Nikol talks about his Eiger project, Schmuskatz of his days as a pioneering glacier photographer; Nikol talks about his relationship with M., Schmuskatz kits both of them out in antiquated mountaineering equipment. Roped up, they embark on the perilous climb two stories up to Nikol’s apartment. Will Nikol, blind drunk, emotional and lost, manage to emulate his Eiger heroes and complete the ascent?

The book has a lovely originality and pulls off its high concept structure superbly. It is funny, genuinely moving and very readable. The combination of literary ambition, historical adventure and affecting love story make for an extraordinarily accomplished debut.

Max Scharnigg was born in 1980 and works as a journalist and author. He is one of the editors of jetzt.de, the Süddeutsche Zeitung’s magazine for young people, and writes among others for AD, Cosmopolitan and das SZ-Magazin. His regular column in the Süddeutsche Zeitung recently appeared in book form under the title Das habe ich jetzt akustisch nicht verstanden (‘I didn’t quite catch that’). Die Besteigung der Eiger-Nordwand is his first novel, for which he won the Munich City literary bursary and was nominated for the Ingeborg Bachmann Prize in 2010. Max Scharnigg lives in Munich.

Hoffmann and Campe Verlag is a publishing house with a long tradition. Founded in 1781, the publishing house was graced in its early days by such authors as Heinrich Heine and Friedrich Hebbel, as well as other members of the rebellious group of young writers known as ‘Junges Deutschland’. Hoffmann and Campe is one of Germany’s largest and most successful general publishers with a portfolio which embraces the works of famous authors and young talent. Since 1951, all works by the eminent writer Siegfried Lenz have been published by Hoffmann and Campe, and it also holds the world rights to authors such as Irene Dische, Matthias Politycki, Nicol Ljubic and Wolf Haas. The non-fiction list includes Stefan Aust, Joachim Bauer, Helmut Schmidt, Gerhard Schröder and Peer Steinbrück.