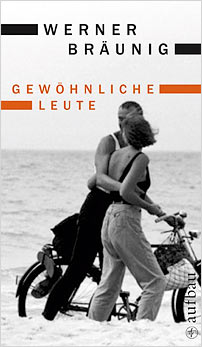 When Aufbau-Verlag published Werner Bräunig’s novel Rummelplatz in 2007 (See NBG – Autumn 2007) it was received, by critics and readers alike, as one of the literary sensations of the past few decades. Written in the early 1960s, it had been banned from publication by the authorities in the GDR, where Bräunig lived, and where he died in 1976 at the early age of forty-two, having never lived to see it in print. He was not a prolific writer, but in 1969 the GDR permitted publication of a collection of short stories under the title of Gewöhnliche Leute, to which several more have now been added in this new edition, like its predecessor impeccably edited by Angela Drescher.

In comparison with Rummelplatz, this a restrained book. In the society it depicts there is no sense of community, no joy of collective labour and achievement. ‘Is it that we all want something, but what comes out is something none of us wanted?’ Bräunig asks. At the very least these stories are a varied, intelligent, atmospheric and highly readable panorama of life in the first two decades of the GDR. But, more than that, they fulfill Bräunig’s stated aim, to write about ‘the extraordinary in everyday lives’.

Both Rummelplatz and these stories are deserving of a new lease of life on our shores.

Werner Bräunig born in Chemnitz in 1934, was regarded as the great hope of GDR literature – until an extract from his novel and masterpiece Rummelplatz (‘Fairground’) met with a ferocious opposition that sealed its fate. He died in Halle in 1976.

The original Aufbau Verlag was founded in 1945 and became the leading cultural and literary publishing house in East Germany. For more information contact the editor.