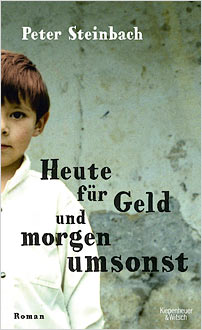 Refreshing, funny and moving, Steinbach’s impressive novel evokes the life of a ten-year-old boy on the outskirts of Leipzig during the final year of World War Two.

However, this is no run-of-the-mill childhood: Osvald Zeitler is the son of a bacteriologist whose scientific eminence – he has twice been nominated for a Nobel Prize – is the single and not wholly reliable factor protecting his Jewish wife and child from extermination. As a Jew, Osvald has long since been barred from school and from society in general, and lives with his parents in a house beyond the pale, rented from an aristocratic landlady much given to whipping her Polish forced labourers. What with his hysterical mother, his distinguished but gross and philandering father, the few maverick outsiders that visit his family home, and his almost total exclusion from the abnormal normality of ‘Naziland’ on the other side of the surrounding fields, Osvald’s childhood perspective, and with it the perspective of the book as a whole, is emphatically that of an extreme outsider.

The main challenge facing any novelist seeking to portray Nazi Germany from the inside is to find a narrative perspective that is at once convincing and sympathetic.

Steinbach succeeds in this by creating a narrator who was, so to speak, in it yet not of it: a witness of Nazism, but in no sense responsible for it. As a half-Jewish child grudgingly permitted a tenuous existence on the fringes of mainstream society, Osvald meets this requirement perfectly. A theninnocent child writing now as a knowing adult, he enables Steinbach to deliver a stream of graphic episodes in which Osvald is an observer but not a central participant, and as such both cameraman and commentator rolled into one. The main characters are unfailingly larger than life, and Steinbach skilfully endows them all with splendidly colourful and warmly comic attributes. Many of the sequences are powerfully realised, such as the haggard wounded soldiers in the passing train; the depiction of the odious local Nazi big shot; and the desperate Russian escapees who so love and are loved by Osvald, but are then mercilessly hunted down and shot like rabbits.

Peter Steinbach was born in 1938 in Leipzig. He spent his childhood and adolescence under the German Reich, in the Soviet Occupied Zone, in the GDR, and after 1953 in West Germany. He was a photography teacher in Cologne, spent six years at sea as a ship’s chef, and worked in the theatre and in the radio, to name a few of a variety of jobs. Since 1976 Steinbach has been a scriptwriter. Steinbach is best known internationally for co-writing the TV series Heimat with Edgar Reitz. He has written numerous screenplays, radioplays, works for the theatre and children’s books. Steinbach has been based in Denmark for the past 34 years.