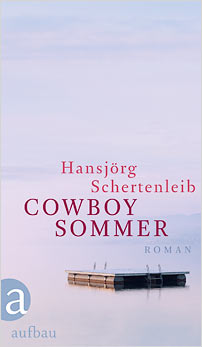 Schertenleib’s magical new novel skips between the present day and the 1970s, and closes intriguingly with an appendix listing seventy vinyl LPs from the late 1960s and early 1970s. Entitled ‘Boyroth’s Record Collection’, this catalogue reflects the atmosphere of nostalgia, vogue and loss that permeates the tale.

Winter 2010: A writer on a reading tour of schools bumps into a friend from his youth, Boyroth, whom he hasn’t seen for thirty years. Boyroth suggests they listen to a record they were unable to track down back in 1974, and so in the chaos of the couple of rooms where Boyroth lives, the two old friends listen to records and get drunk. Tantalising hints of some past trauma that they have shared bring a sense of mystery to this scene, and the reader clamours to fill in the gaps.

The narrative drifts back to that summer of 1974: the first-person account of how the two came to be friends and how things went catastrophically wrong. The future writer – Hanspeter – is a seventeen-year-old apprentice. At a football training session, he meets Walter Roth, Boyroth, likewise seventeen, a junior postman – and it’s hero worship at first sight. What’s more, he has a sister, Yolanda, with whom Hanspeter falls in love, perhaps because he can’t admit he’s fallen in love with Boyroth.

In the summer Hanspeter goes off on holiday, just after Boyroth and another friend, Fabio, have bought real motorcycles, instead of the souped-up little mopeds they’d all been riding around on. Boyroth and Fabio, Yolanda riding pillion with Fabio, are chased by a police car. Fabio crashes, is killed instantly, while Yolanda falls into a coma. Everyone blames Boyroth. When Yolanda dies, Boyroth doesn’t attend the funeral.

Spring 2010: Hanspeter learns that Boyroth has committed suicide in a particularly spectacular way. A little later he’s informed that Boyroth has left him his dog Zappa, his motorbike, and the collection of seventy vinyl LPs.

Cowboy Summer is a very fine novel of teenage and early adult hopes and dreams and energy, and of how the dreams and their disappointment inform the rest of one’s life – and not least how the friendships of those years have an intensity that can never be repeated.

Hansjörg Schertenleib was born in 1957 and now lives in County Donegal in Ireland and in Zürich. He writes plays for radio and the stage, screenplays and stories, as well as novels that have been translated into English (Melville House), Bulgarian (Delakort), French (Jaqueline Chambon), and Spanish (Sexto Piso).