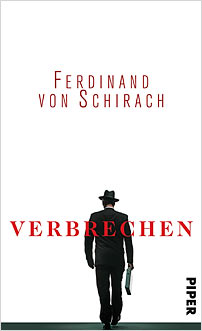 After forty years of marriage Fähner – an elderly and respected local doctor – kills his wife brutally with an axe, yet in a scene of desolate calm. This shocking opener introduces a powerful and finely crafted collection of short stories – Ferdinand von Schirach’s debut. A criminal defence lawyer in Berlin, his day-to-day work is inextricably linked with violence, deception and the seediness of the criminal underworld, defending both the guilty and the innocent.

The author’s background might lead you to think this is just another passable offering of true crime, palatable only to the genre’s enthusiasts. Far from it! Schirach’s experience and confident knowledge of his topic merges seamlessly with his astounding talents as a writer. His prose glides laconically from the profoundly moving to the comical, each story with a startling new angle which compels us to re-examine our preconceptions of ‘criminals’ and their motivations.

The characters are diverse, ranging from the dark edges of society to the privileged: drug dealers, prostitutes, neo-Nazi punks, stately families and respected businessmen are all waiting to be discovered. Told in shorthand, some of these crimes seem easy to condemn, but Schirach’s concise ability to draw us into the perpetrator’s world takes away the possibility of seeing their actions in black and white. Often the crimes committed are the result of a long sequence of chance events – reminding us how very fine the line is between success and failure, prosperity and poverty. A watchman in a museum guards the same room day after day for twenty-three years after the paperwork on his shift rotation is neglectfully misplaced. As the years pass he develops a compulsive obsession with a statue of a young boy struggling to remove a thorn embedded in the sole of his foot. Watching this tireless and unending quest every night, the watchman’s life begins to unravel with bizarre and astonishing consequences.

The reader is subtly inspired to reflect on society’s relationship with the law and punishment through the years: why we punish and how, and who benefits from the redemption and justice we seek. Although there is clearly a common theme to these stories, they never become predictable. Instead, each one draws you in so wilfully that you wish that each was a novel in itself – a truly spellbinding and startling debut.

Ferdinand von Schirach was born in Munich in 1964. His career as a criminal defence lawyer in Berlin has provided the inspirational material for this, his first literary work, a collection of short stories exploring the themes of crime and justice. His past mandates include the former Politbüro member Günther Schabowski, the former BND spy Norbert Juretzko, and numerous prominent figures and characters of the underworld.

Piper Verlag was founded by Reinhard Piper in 1904. The firm published many leading contemporary authors, a tradition followed by the founder’s son and grandson. After 1945 the programme expanded to include philosophy and non-fiction. Piper Verlag now includes the imprints Pendo, Malik, Westend and Piper Fantasy, and has been part of the Swedish group Bonnier since 1995. Authors include Ingeborg Bachmann, Hape Kerkeling, Annette Pehnt, Gaby Hauptmann, Jakob Hein, Walter Moers und Markus Heitz.