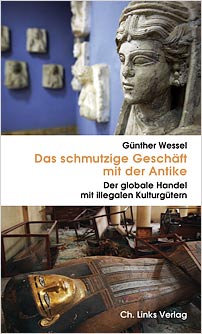 The black market antiques trade is a cultural and political hot potato. In his hard-hitting and compelling book, Günther Wessel makes it uncomfortably clear that it encompasses not only terrorist organisations such as the Taliban and IS, but also respectable institutions, diplomatic agencies, museums and auction houses throughout Europe and the USA, alongside private collectors and dealers. Wessel’s far-reaching account details the routes, ways and means through which antiquities are transferred from rightful owners to others. Equally impressive is his tone throughout: avoiding handwringing and righteous indignation, Wessel explores both good and bad practice, outlines and counters arguments often deployed to justify doubtful trade and suggests where legal loopholes should be closed and where individuals and institutions could improve the situation. This meticulously researched book pulls the various witnesses and enterprises together into a well-argued declaration of a cultural state of emergency.

Dirty Business with Antiquity will appeal widely to English-language readers and is sure to provoke lively discussion, since UK and US institutions, media and individuals feature among both the ‘baddies’ and the ‘goodies’ here. This is a wake-up call which should be heard.

Günther Wessel was born in 1959 and studied German literature and philosophy. He worked as a freelance journalist and editor for more than twenty years. He is author of numerous travel guides and biographies, as well as radio features for all major German broadcasters. He worked as a journalist in Washington D.C. from 1998 to 2001, from 2002 to 2007 in Brussels, and since September 2007 in Berlin.