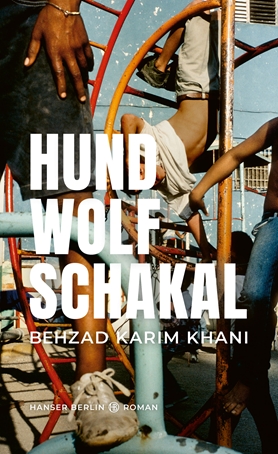 Dog Wolf Jackal is a spectacular debut that has garnered rave reviews in Germany. The novel tells the story of two brothers and their father who leave Iran for Berlin in the late 1980s. One of the brothers is drawn into a culture of gang crime in the Berlin district of Neukölln.

Saam grows up in a small Iranian town in the shadow of the Gulf War; explosions rock the city every night. Two monsters: the war and Iran’s Evin prison, dominate his life. His mother was executed during the Revolution. One night when he is playing with the corpse of a cricket, four men surround his father, Jamshid, and take him away. Jamshid, a Marxist who lost a leg during a clash with the authorities during the Revolution, had been awaiting this knock at the door.

Handed the fake passport he’d applied for in order to flee, Jamshid and his two sons make the four-day journey to the Turkish border, and from there to Germany, a destination described as solid like their grandmother’s sewing machine. Saam had earlier hidden in his grandmother’s wardrobe when the men took his father away.

After months on benefits, Jamshid trains as a (one-legged) taxi driver in Berlin. The family eats a lot of pizza and buys a microwave, the height of luxury. Saam starts secondary school, and his younger brother Nima attends primary school. Saam falls in with the wrong crowd. An older Syrian boy lavishes gifts on Saam, which seem to involve obligations in return. In an altercation over a cap, the Syrian boy stabs another in the leg.

As Saam fights to earn respect and protect his brother, we see his gradual development into a violent thug who ends up in prison.

By the early 90s Saam is starting to make money. He has proven himself a dab hand at selling knockoff goods. Well-known within the local gang circles, he knows his way around rap music and smart clothes.

Having acquired a gun and a Doberman (which he fails to house train), he begins to hold up pizzerias and late-night stores. He eventually overreaches, attacking a pharmacy where he is shot in the arm and jailed.

The latter part of the book is an account of Saam’s time in prison (a fate his father also experienced back in Iran). We see the power relations that have to be negotiated within the institution, the various battles and the fights for dominance. After a fight he is put in isolation for a time and encounters something like spiritual terror that changes him, perhaps returning him in a way to the child that he was. He carries with him the body of a dead fly that perhaps symbolises his childhood.

Meanwhile his brother Nima gets involved with Berlin’s alternative skateboarding scene and the two brothers drift apart, until eventually Saam gets a letter from his brother saying that his father has died, and enclosing a picture of the three of them in Teheran. Saam is becoming reconciled to his life when, in the midst of a vision involving (once again) insects, he is shot, execution-style. The shooter is a teenage boy, and this was his rite of passage.

The writing style is sharp, fast, and often brutal, and then contemplative and poetic. In the background are hints of Iranian folklore, with a man who is potentially a djinn appearing in a scene in a bar and later with Saam wondering if some messages he finds in a jacket pocket might be used to summon djinns.

The author has described the book as being about destiny and has written a novel which deals with the complex fates of both revolutionaries and of those who become involved in a culture of crime.

It explodes with energy and violence, stopping just short of being voyeuristic, and gives a very powerful sense not only of what it must be like to grow up in that kind of milieu but how easy it is to fall through the net (and also the excitement that it entails).

I think it’s an important book, and it’s supremely readable.

Behzad Karim Khani was born in 1972 in Tehran and came to Germany with his family in 1986. He studied Media Studies and lives in Kreuzberg, Berlin where he also runs the Lugosi bar.