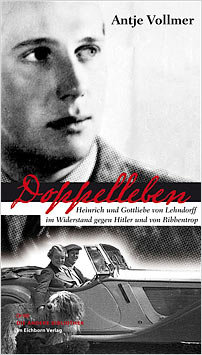 Vollmer’s brilliant and moving account challenges the widely accepted but simplistic belief that the German resistance, and particularly the failed coup d’état headed by Stauffenberg and Tresckow, was a case of too little, too late.

Heinrich von Lehndorff took over the estate of Steinort, one of the largest in East Prussia, in 1936. He loved the land and managed it well. For his wife Gottliebe, its peace and natural beauty were a world apart. Their double-life proper began in 1941 when, just fourteen kilometres from Steinort, Hitler established his headquarters for the Eastern Front – his ‘Wolf’s Lair’. From then until late 1944, Hitler spent the majority of his time there. Foreign Minister Ribbentrop wanted to be housed nearby, and he took over one wing of Steinort. Meanwhile his ‘hosts’, members of the German Confessing Church and now fully signed up to the resistance, welcomed quite different guests in the other wing.

Former Green politician Vollmer makes a convincing case for the importance of their story and for the place they deserve in the annals of history.

Antje Vollmer was born in 1943 and was a member of the German Parliament for almost twenty years, serving as the Vice President from 1994 to 2005. She is the recipient of both the Carl von Ossietzky Medal and the Hannah Arendt Prize. For her role in the German-Czech reconciliation, she was honoured as a member of the Masaryk Order by President Vaclav Havel.

Founded in 1980, Eichborn is regarded as a young and bold independent publishing house. Its strong and diverse list includes fiction, non-fiction, humour, and reference books.