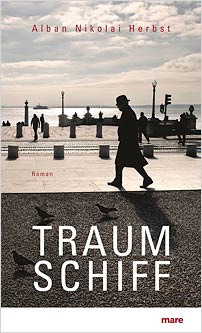 Dreamship is an extraordinary and intriguing piece of literary fiction: surreal, soulful and funny, Alban Nikolai Herbst takes us with him on a cruise like no other.

Gregor Lanmeister is one of 144 passengers destined never to leave the ship on which he is travelling. Gregor – once a successful businessman – is dying, and spends this final journey that will end in his death with other characters in the same predicament. Yet while Dreamship is a novel about dying – about how we come to terms with our death and how we leave people behind – it is also a novel about how we rejoice in the life we have lived. The novel would sit well alongside Haruki Murakami’s similarly otherworldly and poetic trilogy IQ84, and its use of strong allegorical themes recalls Katherine Porter’s Ship of Fools.

Gregor spends his time on board the cruise liner reminiscing about his life – remembering his childhood, his work and his wives – and taking stock of his regrets and doubts. He has circumnavigated the world at least twice already, and does not know when it will be his turn to go, but he knows that his time will come. Rather like the game of Mah Jong, the total number of passengers on the ship will never change, so when one of their number departs, another soul will come on board at the next harbour. Readers are led to believe that the ship’s passengers belong to a chosen few who have been selected to pass into another realm. Gregor has various friends on board: Monsieur Bayoun, the man who has shown him all of this, the mysterious lady Porto, Clochard, and of course Kateryna, the young Russian pianist whom he lovingly names Lastotshka, his delicate Swallow. This cast of strange characters enlivens his ever more confusing world and transforms the story into an allegory for life, love and death.

Alban Nikolai Herbst is a postmodern writer who has received much critical acclaim in his native Germany, not least for his otherworldly trilogy Anderswelt, which he completed in 2013. His brand of sophisticated, futuristic literature has won him many fans and his online blog has something of a cult following. Dreamship is a meandering and mesmerising narrative that will captivate Englishlanguage readers and serve as the ideal introduction to Herbst’s fascinating body of work.

Alban Nikolai Herbst was born in 1955 and has been rewarded with several literary prices for his large oeuvre.

mareverlag is a Hamburg-based magazine and book publisher that brings out both fiction as well as various non-fiction genres (cultural history, popular science, biographies, travel writing, discovery, adventure). mareverlag encourages the attention of the reader to focus on the sea in its objective, symbolic, metaphorical, historical and ecological significance for the world and mankind.