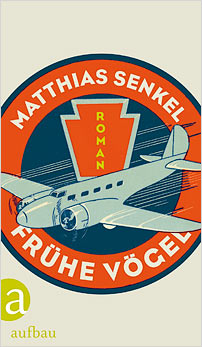 With its sweeping historical panorama, dark humour and alternative futures, Early Birds is fictional experimentation of the highest order.

Senkel tells the story of several generations of a family obsessed with aviation, starting with Theodor Wilhelm Leudoldt around the turn of the last century. Fascinated by mathematics and chess, Theodor rebels against his grandfather’s love of the railways to take an interest in flying, and we follow him as he runs a pioneering aviation company, takes a not-entirely-voluntary part in the Nazis’ V2 rocket programme, and is killed during an air raid on Berlin. We also find out about his three marriages, one of convenience and two for love, and his travels to Paris and London. During his stay in Paris, Theodor hears the story of Gökhan Çelebi, an aviation ace in sixteenth-century Ottoman Turkey, and readers are treated to this tale as the novel sidesteps to a star-crossed love story.

After Theodor’s death the perspective switches to his daughter, Ursula, who is sent to an uncle while her engineer mother Gerlind is working in the underground rocket factory. The family are then whisked away to America to work on the US space programme. Gerlind marries an all-American engineer and she and Ursula fall pregnant at the same time. In one possible ending, Ursula’s daughter Michelle becomes the first woman on the moon but dies in the rushed attempt to outdo the Soviets, while Ursula illustrates pulp science fiction and ends up in a mental asylum. In the alternative version, Michelle dies at birth and Ursula becomes a high-flying mathematician, returning to Germany for the funeral of the family’s loyal retainer but still harbouring a touch of Cold War paranoia. In both versions, Ursula and Michelle have to battle against sexism to achieve their progressive goals.

Senkel sketches a new world in which the Soviet Union wins the space race and a fictitious US senator becomes president. The book closes with an appendix detailing the death of every single character in the novel – and there are many of them. The chapter describing the Nazis’ attempt to recruit Theodor for their rocket programme takes the form of a comic, drawn in the style of the pulp science fiction that is important to the novel and playing on clichés of the fanatical Nazi and the refined, wealthy engineering genius. A dazzling debut.

Matthias Senkel is a literary whizz kid. Born in 1977 in Greiz, Germany, he lives and works in Leipzig. Senkel was the winner of the 17th Open Mike as well as the taz Reader’s Jury Prize. A writer of poetry as well as prose, his work has been published in journals and anthologies. Senkel studied at the Leipzig Literature Institute. Frühe Vögel is his debut novel and was nominated for the Silberschwein prize for best debut at the Cologne International Literature Festival.