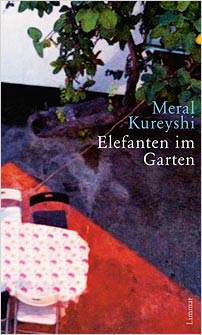 Meral Kureyshi’s thoughtful debut is a beautiful meditation on the father-daughter relationship, mourning, and the experience of immigration.

The narrator of Elephants in the Garden is a girl of twenty-four whose name is never revealed to us. The story starts with the unexpected death of her father, and then moves between recounting the narrator’s struggle to accept this loss and stories from her childhood – both in her former home in Prizren, Kosovo and in Switzerland, where the family move to when the narrator is ten. In the present-day sections the narrator addresses her father directly, bringing a poignant quality to the narrative. She writes perceptively about the family’s struggles to integrate into Swiss life, especially with regard to the language and the bureaucratic problems of immigration. We hear about the particular problem of finding a permanent home for the family, which in the end takes more than a decade and doesn’t happen until after the father’s death. The fact that we don’t know the narrator’s name seems to be part of her identity crisis: she discusses her name on several occasions, in one place saying she always wanted to be called ‘Sarah’ and would give that as her name to anyone who asked.

The childhood stories allow readers to get to know both the narrator and her father, and we hear about her home life and difficult relationship with her mother. Some of the childhood episodes focus on the narrator’s time at school in Switzerland, where she struggles to make friends but conceals this fact from her parents. Her sense of isolation is magnified due to being in a strange place where those around her are unwilling to accept her or make an effort to include her, leading her to pretend to her family that she is happier than she really is. The narrator is motivated by a desire to tell the truth without being judged for what she says, with the result that the novel frequently exposes the disparity between the girl inside and the girl that she often portrays herself to be.

As she grieves for her father, the narrator visits Prizren where she finds that much has changed since she moved away, ultimately intensifying her sense of loss. In addition to the thought-provoking emotional journey we share with its narrator, Elephants in the Garden offers much-needed insights into the challenges faced by migrants in their struggles to assimilate into a new culture.

Limmat Verlag was founded in 1975 and is one of the most important publishing houses in Switzerland. They publish literature in German and translations from all languages in Switzerland, non-fiction and photo-books.