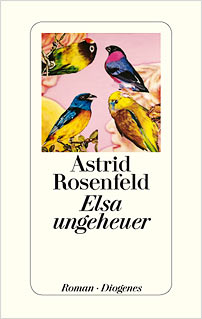 Elsa Forever is ready-made to appeal to readers of Englishlanguage literary fiction: tightly plotted and imaginative, full of provocative episodes and laced with plenty of humour. Astrid Rosenfeld traces an unorthodox journey from a country childhood to the metropolitan modern art scene with all its eccentric glamour.

Lorenz Brauer and his younger brother Karl are still children when their Dutch mother Hanna kills herself. They live in a guest house in rural Bavaria, run by their father. Their lives change forever when another child arrives in the village. Elsa is difficult and strange and our first sightings of her consist of distant screams, slamming doors and bloody scratches on her father’s face. When she finally emerges she is skinny with wild hair, wearing her mother’s old clothes and an enormous pair of latex boots, earning her the nickname ‘Flamingo’. Lorenz fights with Elsa constantly while Karl adores her, but has no chance. Still, the three children spend all their time together until, at fifteen, Elsa elopes with the village slaughter man to a ranch in Texas.

Lorenz deals with Elsa’s departure by devoting himself to painting and goes to Düsseldorf to study art. He becomes the protégé of a rich American art collector, Irina Graham, and art-world sleaze Sebastian Mirberg, who lines him up with a gallery. When, however, Lorenz catches Sebastian in flagrante with his girlfriend and punches his teeth out, Sebastian drops Lorenz, who consequently loses his place at college, his gallery deal and the support of Irina Graham. Sebastian withdraws while his teeth are fixed and writes a novel in which a man travels the world to masturbate in front of famous paintings of women. It culminates with him ejaculating over Rembrandt’s Andromeda, Irina Graham’s all-time favourite painting. Irina’s revenge leads her to denigrate Sebastian and rehabilitate Lorenz Brauer.

Lorenz’s idea for his life’s work, a single painting on which each image is obscured by the next, ultimately takes us back to where the novel began. The successive images are all scenes from their rural childhood. When, following a series of revelations about his teenage relationship with Elsa, Lorenz abandons the project, Karl strips off the layers Lorenz has painted so far and finds the first painting: an image of Elsa echoing the iconography of Andromeda. Rosenfeld’s satirical portrayal of the excesses of the modern art world is assured and very funny.

Astrid Rosenfeld was born in Cologne in 1977. After her high school graduation, Rosenfeld went to California for two years where she worked at a small theatre. After that, she began to train as an actress in Berlin, before quitting the course one and a half years in. Since then she has held a variety of jobs in the film industry, including as a casting director. Her debut, Adams Erbe (‘Adam’s Legacy’), was on the longlist for the German Book Prize 2011. Astrid Rosenfeld lives in Berlin.