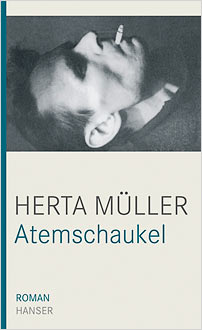 ‘I know you’ll come back’. These are the words the grandmother of seventeen-year-old Leopold Auberg says to him the night he is collected by Russian soldiers for deportation to a labour camp in the Ukraine. From the very first page of this compelling new novel it becomes clear that Müller is an author who wields an extraordinary power over words. Equally astonishing is her convincing handling of such a serious subject: extensive research and collaboration with the late Romanian-German poet Oskar Pastior about his experiences in the Gulag have given this work a life force of its own.

As the reader joins the young narrator his family are helping him pack his few belongings together into an old gramophone case, trying to overcome their fear and helplessness at his departure. He is herded onto a cattle train with other camp internees and undergoes the gruelling and exhausting journey to the Gulag. Once in the camp, the stereotypical issues the reader may expect to be confronted with are barely mentioned, here the focus is on the smaller – and at first glance insignificant – details which threaten the internees’ dignity and emphasise the control they have lost over their lives. Most startling is the way in which the author subverts the reader’s conceptions of what would be imagined to be the worst elements, such as the unrelenting hunger which consumes Leopold: ultimately this is what keeps him alive, acting as his connection with the world. When they are released from the camp the reader expects elation, but instead they are frightened: despite its harsh and bleak conditions the camp has become their world, its walls their safety, its oppressions their routines.

This is truly a remarkable novel. The language is poetic and masterful, but also joyous in its simplicity and imagery: a young woman in the camp – who had been discovered through the footprints outside her hideaway back home – claims that she will never forgive the snow. Every other substance would have swallowed the evidence of her existence – water, sand, dirt – but the freshly fallen snow can never be a silent accomplice. Müller has a highly individual voice, and this novel, which also shines a light on a fascinating but still neglected aspect of German history, deserves to be brought to the attention of an international readership.

Herta Müller was born in Romania in 1953. Following the uncensored publication of her first novel in Germany in 1984, and her refusal to work for the Romanian secret service, she was subsequently banned from publication in her homeland and subjected to continuing persecution in both her professional and private life. She emigrated to Germany in 1987, and now lives in Berlin. Since 1989 she has been guest professor at universities in England, the USA, Switzerland and Germany. Among the prizes she has won for her widely-praised novels and collections of essays are the Berliner Literaturpreis in 2005, the Franz Kafka prize in 1999, and, most recently, the prize of the Düsseldorf Heinrich Heine Society in 2009.

Carl Hanser Verlag was established by its eponymous owner in 1928 in Munich, and its founder’s interests in both literature and science have been maintained to the present day. The firm publishes fiction and non-fiction for both adults and children. Its authors include Italo Calvino, Umberto Eco, Jostein Gaarder, Lars Gustafsson, Milan Kundera, Harry Mulisch, Philip Roth and Susan Sontag.