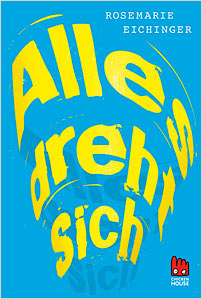 Fifteen-year-old Linda has just been diagnosed with a brain tumour. As she sits in the park outside the clinic trying to make sense of it all, a boy called Max speaks to her and tells her that he has leukaemia. They join forces and decide to draw up a list of things to do before they die – including visiting a hairdresser to get their hair dyed blue. Before long, however, Max confesses that he does not have cancer but was actually advised to visit the clinic by his psychiatrist to see what is truly worth valuing in life. Unable to admit this to Linda’s face, he sets up a web page to tell his side of the story.

The novel’s focus shifts after anonymous comments are posted on Max’s website pointing out the extremely high standard of living which he enjoys in relation to most of the rest of the world. Shocked into a sense of perspective, the teens resolve to campaign against consumerism and exploitation and begin a series of protests which send ripples across the city as more and more young people are inspired to join in. Eichinger’s debut novel is a powerful take on teenage rebellion for the digital generation.

Rosemarie Eichinger was born in 1970. She studied history in Vienna where she still lives with her partner and daughter. Her favourite place to write is a small dark bathroom where she tests first sentences and concentrates on her story.