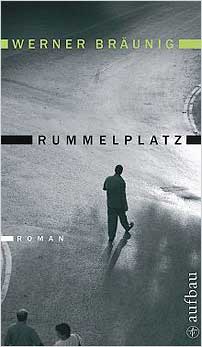 The censored or banned work has achieved near mythological status in post-war literature. Too often romanticised by a book-buying public, ‘banned’ works take on a momentum of their own. And yet, at times, it is difficult to distinguish the myth from the reality, leading the reader to question whether certain books would otherwise have earned their keep.

Suppressed by the East German censorship authorities in 1965, Werner Bräunig’s Rummelplatz (‘Fairground’) comes with all these heightened expectations. Furthermore, the author cuts a tragic-heroic figure. Born in 1934, Bräunig worked as a welder, miner and journalist before becoming a freelance writer in the late 1960s. Though hailed as the great hope for the nascent Republic, he died tragically at the age of forty-two from alcohol-related illness. Rummelplatz, however, does not disappoint. It is an exceptional work that survives literary scrutiny and surely its author will now be considered one of the leading writers of postwar German literature, alongside Heinrich Böll and Günter Grass.

Rummelplatz is a novel of epic proportions, focusing on those whose lives are connected to Wismut, East Germany’s notorious uranium mine, run by the Soviet and supplying the ‘brotherland’ with much-needed uranium for its atomic programme. The mine attracts war veterans, fortune-seekers and outsiders like Peter Loose (in effect the author’s alter-ego), who had a difficult childhood and an SS-party-member father. Although these workers are well remunerated – the local paper factory suffers as a result – life in the mine is bleak. Safety provisions are almost non-existent and there are inadequate tools with which to work. The only outlet for the mine’s workers are the bars and fairground where copious amounts of alcohol are consumed and the usual fights ensue. Wismut is a microcosm of the nascent society that was East Germany.

Bräunig – reminiscent of Émile Zola in Germinal – writes with searing humanity, giving a vital voice to the numerous workers that differentiates them from the apparatchiks. The old hand, Hermann Fischer, who was imprisoned in a concentration camp because of his left-wing views, tries to build a new Germany and teach the younger generation. His daughter Ruth fights for women’s right to work heavy machinery. The characters are intrinsically human, and by the end the author asks all of them the salient question: ‘What is left behind when a worker dies? His work?’ Bräunig believes that there is no one, no matter how poor, who does not leave something behind. He himself has left more than most.

There has never been a better time to publish a book with East Germany as its subject (consider Michael Frayn’s Democracy, Anna Funder’s Stasiland or Florian Henckel von Donnermarck’s Oscar-winning Das Leben der Anderen – The Lives of Others) and Aufbau are to be congratulated on not only publishing the full-length text of something over 600 pages but also an abridged version. Someone here must follow suit.

Werner Bräunig born in Chemnitz in 1934, was regarded as the great hope of GDR literature – until an extract from Rummelplatz was read at the eleventh plenum of the censoring central committee of the SED and met with a ferocious opposition that sealed its fate. He had started writing in the mid-1950s after various short-term jobs including a stint at the Wismut-AG uranium mine. Regarded as a ‘worker-writer’, he was encouraged to play an active role in the Bitterfeld Conference in 1964, aimed at bringing artists and writers to the factories and workplaces under the slogan: ‘Take up your pen, pal, socialist national literature needs you!’ Bräunig studied at the Johannes R. Becher Institute of Literature (now the Leipzig Institute for German Literature – see nbg autumn 2006). He died in Halle in 1976 at the young age of forty-two, but left behind one of the most important works of post-war German literature.