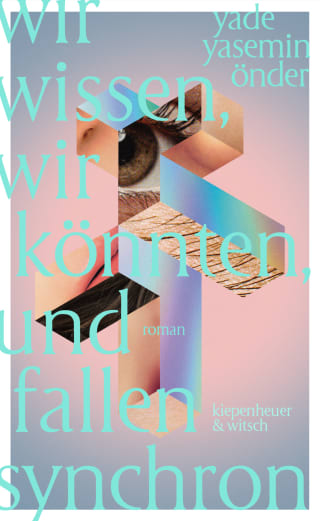 we know, we could and we fall in sync is an inventive, exuberant, darkly comic and at times brutal novel about loss, dysfunctional family relationships, growing up German with Turkish heritage, and self-disgust.

A baby girl is born in West Germany in the mid-1980s (‘one year after Chernobyl’). Her mother is German, her father Turkish, and the family lives on a meadow in a three-bedroom house. They go on holidays to Turkey and visit the child’s Turkish grandfather who has a hole in his throat and whose language she doesn’t speak. Back in Germany, her German grandparents disapprove of her father for not being German, not having a good enough job, and being immensely fat — which they suspect will also be their granddaughter’s fate.

One day, her father cuts off both his arms in a chainsaw accident and dies in a bloodbath on the meadow. From then on the girl has him on her conscience, which is a considerable burden for an eight-year-old to bear.

The girl’s mother also seems to blame her for the father’s death, and their relationship falls apart. Left to her own devices, the girl eats her way through all the food in the kitchen, then throws it up. She is part of a gang of five friends (who may or may not actually exist), and they go out on the town, get drunk and meet boys. She is a teenager, but everyone thinks she is a whore.

At school she is rejected by the boy she fancies, who taunts her for being Turkish and says she stinks of garlic. She masks the alleged smell by eating more and puking. She wants to be loved.

As a young woman, she finds herself in a hole in the ground (described literally) where she has sex with a stranger who happens to fall on top of her and who ties her up with his belt. When he leaves, she is on her own.

Finally, she sets off for Istanbul to find her father who is floating like an immense monster in the Black Sea and asks him how his mother died and where he has been.

Structured as a series of scenes from the girl’s life, starting with her birth and ending with her reunion with her missing father, the novel is recounted in a first-person present-tense narrative. It moves from one scene to the next, sometimes re-telling the same episode — first as literary description, then as an exaggeratedly detailed account where adjectives are replaced by statistics. Darkly funny and cartoon-like with larger-than-life characters and magical turns of events, it presents a space without any clear delineation between what is real and what is imagined.

Often leaving the reader to piece together the narrative and the connections between scenes, Önder’s writing is vibrant, bold and nightmarishly fantastical. Her underlying themes of female pain and self-harm recall Elfriede Jelinek and she draws effectively on the traditions of literary Ekel (disgust), especially in her grotesque depictions of bulimia and masochistic sex, as she tells the story of a young woman who keeps on losing and finding herself, falling apart and putting herself back together, trying to find a way out of her family. A tempestuous and startling novel about physicality, strangeness, identity and difference.

Önder was born in Wiesbaden, West Germany and her play Kartonage premiered at the Burgtheater in Vienna. She won the prose category at the Open Mike awards in 2018, and has received other awards and grants. This is her first novel.

Yade Yasemin Önder studied literature and education, literary writing, and stage and screen writing. She was invited to participate in the 2017 Autorentheatertage (Author Theater Days) with her first play Kartonage, which premiered at the Vienna Burgtheater. In 2018, she won the prose category of the Open Mike competition and in 2019 she won the Martha Saalfeld sponsorship award. She is a 2021 fellow at the Tarabya Cultural Academy in Istanbul.