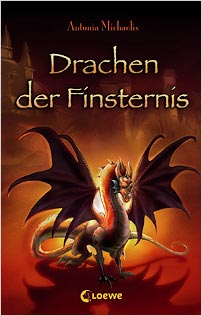 On not one of the 448 pages of this wonderfully exciting tale does one look to see when it will end. Quite the contrary, it draws the reader in with lively and likeable characters as it rushes at high speed through a range of death-defying adventures. There are three main characters: two boys (Christopher, a German, hoping to find his 19-year-old kidnapped brother, and Jumar, the invisible crown prince of Nepal); and a girl (Niya, an initially starry-eyed Communist revolutionary), all 14 years old.

While studying a picture book on Nepal to try to get a feel for where his brother is, Christopher is sucked into the picture and finds himself in a Himalayan forest, where he stumbles over Jumar who has been caught in a mantrap having escaped from the palace and made his way to the mountains from Katmandu. The story follows them on their steep path uphill as they pass through villages, encounter dragons who feed on colour and whose shadow turns people into bronze statues, join and then escape from a Communist Revolutionary training camp, endure freezing weather, navigate underground rivers, and finally reach the summit itself where Jumar faces the dragon (which turns out to consist of millions of butterflies) and achieves visibility. They then have to descend via yet more dangers and adventures before they can save the country from both the military and the Communists.

At heart this is a ‘rites of passage’ story, which, like older versions of the genre, has magic mixed up into everyday life to create an extreme arena in which the heroes and heroine must learn to become healthily functioning adults. The gradual bonding between the two boys is tested almost to its limit with the arrival of Niya, with whom both of them fall in love. She, disillusioned by her experiences of real-life Communism, escapes with them and takes on their quests, before tragically losing her life in the last throes of the battle.

This is a truly splendid tale, suitable for all readers of around thirteen with a fondness for adventure.

Antonia Michaelis was born in Kiel in 1979 and spent the early years in a village by the Baltic Sea with her pleasantly eccentric parents and a variety of cats. A year in Southern India after school gave her itchy feet which have since taken her to Peru, Ghana, Syria and the British Isles. Antonia studied medicine and currently lives in a small village in northern Germany enjoying the perks and pitfalls of small town life.

Rights to this novel have been bought by Harry A. Abrams (USA)

Loewe Verlag GmbH was founded in 1863 by Friedrich Loewe in Leipzig. It is one of the oldest and most important children’s books publishers in Germany. Throughout the twentieth century, Loewe has published fairy tales, children’s classics and picture books; Heinrich Hoffmann’s Struwwelpeter (1903) and other great survivors were first published by the firm. Today Loewe publishes a broad range of titles, from picture books to high quality children’s fiction, and non-fiction for both children and young adults. Authors include Cornelia Funke and Kai Meyer.